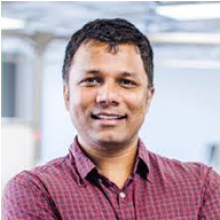 Abstract: This talk will discuss the fundamental challenges in the design of next-generation blockchain systems. The first challenge highlighted is scalability: current blockchain systems are unable to support high transaction rates within the blockchain without suffering from high costs and/or poor decentralization. The first part of the talk will characterize the limits of scalability in blockchains, and then present an architecture that enables better scalability with low, deterministic costs associated with blockchain transactions. The second challenge studied is that of security: current blockchain systems tradeoff security and performance, where security is oftentimes heavily compromised for modest improvements in performance. The second part of the talk utilizes mean field games to characterize the optimal security-performance tradeoffs for blockchains, and demonstrates that a number of current blockchains are sub-optimal from this perspective. Finally, the talk demonstrates that optimal points of operation between security and performance can indeed be realized in practice.

Vishwanath’s research is in the domains of wireless networking and systems, information and coding theory, machine learning systems and newly in blockchain systems. He has over 250 refereed research papers and multiple research awards. He works across a diverse set of areas and specializes in bridging the gap between theory and practice. In particular, he has been involved in multiple spinouts from The University of Texas (as well as startups independent from The University of Texas).

He is a co-founder of Symmetry Systems, a company that specializes in intrinsic security solutions for databases, microservices and data-in-motion systems. He is also the co-founder of GenXComm, a company focused on the development of 5G telecommunications systems. He has also co-founded Accordion Health (acquired by Evolent Health), Lynx Laboratories (acquired by Occipital) and M87 Inc (acquired by XCOM). He focuses on research that can be translated to products, and has considerable experience as CEO, CTO and VP of engineering at startup companies. He has multiple patents and has developed software solutions that are both copyrighted and open sourced. He has taught multiple entrepreneurship classes at The University of Texas, Austin.

Vishwanath received the NSF CAREER award in 2005 and the ARO Young Investigator Award in 2008. He was the 2014 UT faculty entrepreneur of the year, and was honored in the Reuters list of highly cited researchers in 2014 and 2015.