EECS Seminar: Towards the Development of Thermal Models for Multifinger Bipolar Transistors 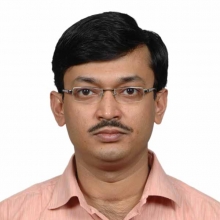 Abstract: High demands for the performance improvements of application specific circuits and systems are mostly met by the ongoing march of semiconductor technology evolution. In order to extract the high level of performance from a given semiconductor footprint, modern high-speed devices, such as silicon germanium heterojunction bipolar transistors (SiGe HBTs), are made to operate under high current densities. Use of aggressive scaling and various isolation technologies inevitably gave rise to an unwanted issue popularly known as electrothermal effect that pulls down the overall performance of the devices. The rise in device temperature due to this 'dirty' byproduct of electrical performance becomes more critical in multifinger transistors being used for power amplifiers that dissipate a significant amount of power as heat within the devices. Simple and accurate equivalent circuit models of such semiconductor devices are required to enable fast and reliable circuit design prior to any actual fabrication. It is, therefore, imperative to accurately account for the electrothermal effect within the simple equivalent circuit model framework.

Bio: Professor Anjan Chakravorty works in the area of compact modeling of semiconductor devices. His research interests include the modeling of bipolar and field effect transistors such as SiGe-HBTs, LD-MOSFETs, DG-MOSFETs, GaN-HEMTs and design of on-chip inductors. He earned his Ph.D. from IIT Kharagpur, India, in collaboration with IHP Microelectronics, Germany, in 2005 and immediately joined as a postdoctoral researcher at TU Dresden, Germany. In 2007, he joined IIT Madras where he is currently a professor. He co-authored a book and more than one hundred international journal and conference publications. He spent the year 2015 at University of Bordeaux where he was introduced to the interesting area of electrothermal modeling of semiconductor devices. This year he is spending six months at UC Irvine as a Fulbright fellow with a research focus on the investigation of electrothermal effects in carbon nanotube based FETs.