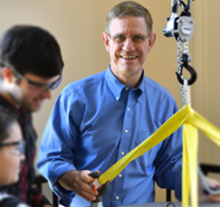 Abstract: The focus on nanoscience has greatly advanced our ability to synthesize, characterize and model nanomaterials with unprecedented physical and chemical properties that are derived from dimensional constraints. However, challenges in bridging nano- to mesoscale fabrication and microstructural instabilities present serious obstacles to the widespread commercialization of structural nanomaterials. Sputter deposited nanotwinned NiMoW films have been shown to possess ultrahigh mechanical strength, extreme anisotropic plasticity, low electrical resistivity, low thermal expansion and much needed thermal and mechanical microstructural stability. Here we report on experiments to elucidate the fundamental deformation mechanisms that underpin the extreme strength and highly anisotropic deformation of nanotwinned NiMoW. Related efforts involving the fabrication of freestanding microcantilever arrays with the dimensional stability required for next generation metal MEMS and IoT technologies will also be discussed.

Bio: Kevin Hemker is the Alonzo G. Decker Chair and professor of mechanical engineering at Johns Hopkins University and holds joint appointments in the Departments of Materials Science & Engineering and Earth & Planetary Sciences. He earned a bachelor's degree in metallurgy from the University of Cincinnati, master's degree and doctorate in materials science and engineering from Stanford University and completed a postdoctoral fellowship in physics at the Ecole Polytechnique Federale de Lausanne. He joined the faculty at Johns Hopkins University in 1993, was an NSF National Young Investigator (1994), an invited professor at the EPFL (1995) and the University of Paris XIII (2001), and received the ASM Materials Science Research Silver Medal in 2001. He served as chair of the Department of Mechanical Engineering (2007-2013) and editor of Scripta Materialia (2004-2011). Hemker was a member and vice chair of the DARPA Defense Science Research Council (2010-2014), a member of the SRI Technology Council (2017-2019) and was the 2018 president of The Minerals, Metals, Materials Society (TMS). He is currently a member of the HRL Technical Advisory Group and the NCMS AMMP Advisory Council. Hemker is a fellow of AAAS, ASME, ASM International and TMS.

Hemker has mentored over 75 postdoctoral fellows, and doctoral and master's students since coming to Hopkins, about 20 of whom now have tenured or tenure-track academic positions in major research universities. His group strives to elucidate the underlying atomic-level details that govern the mechanical response, performance and reliability of disparate material systems. They have made key observations and discoveries that have challenged the way the community thinks about and understands materials behavior in additive manufacturing, nanocrystalline materials, materials for MEMS, metallic micro-lattices, thermal barrier coatings for satellites and gas turbines, armor ceramics, extreme environments and high temperature structural materials in general. The results of their research have been disseminated in approximately 250 scientific articles, four co-edited books and hundreds of invited presentations and plenary lectures.