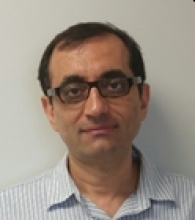 Professor
CREOL, The College of Optics and Photonics
University of Central Florida

Abstract: The excellent electrooptic and nonlinear-optical properties of lithium niobate have long established it as a prevailing photonic material for the long-haul telecom modulator and wavelength-converter markets. However, conventional lithium niobate optical waveguides are low-index contrast, and hence bulky compared to modern integrated platforms such as silicon photonics. The bulkiness impedes photonic circuit implementations and imposes high optical power requirements for nonlinear applications.

To address these shortcomings, thin-film lithium niobate wafers and high-contrast waveguides (with submicron cross-sectional dimensions) were developed for the first time at CREOL in 2013. Since then, we have demonstrated a plethora of ultracompact integrated photonic devices and circuits (waveguides, microring resonators, modulators, grating couplers, wavelength converters, entangled photon sources, etc.) with significantly superior performances than the conventional lithium niobate counterparts. More recently, commercial availability of the thin-film wafers has facilitated entering of several other research teams into this growing field. The overall efforts have rejuvenated lithium niobate for novel electrooptic and nonlinear- and quantum-optic applications, and the material is considered among the top candidates for heterogeneous integrated photonics. That is when multiple materials are monolithically integrated on the same silicon chip, while each material is chosen for the functionalities that best suits it.

Progress in thin-film lithium niobate integrated photonics, its future directions, opportunities and challenges will be discussed.

Bio: Sasan Fathpour is a professor at CREOL, College of Optics and Photonics at the University of Central Florida. He received a doctorate in electrical engineering from the University of Michigan, Ann Arbor, in 2005. His current research interests include heterogeneous integrated photonics, nonlinear integrated optics, silicon photonics and unconventional photonic platforms operating in the mid-wave- and near-infrared and visible wavelength ranges. His CREOL team’s research has been highlighted in Nature Photonics, Optics and Photonics News, Laser Focus World, photonics.com and several other trade magazines and professional websites. He has received the U.S. National Science Foundation CAREER Award (2012) and the Office of Naval Research Young Investigator Program Award (2013).

Fathpour is a co-author of about 180 publications, including 36 invited journal papers and conference presentations, six book chapters and three patents. He has co-edited the book Silicon Photonics for Telecommunications and Biomedicine, CRC Press (2012). He is the cofounder of Partow Technologies, LLC, and is a fellow of the OSA and a senior member of IEEE and SPIE.