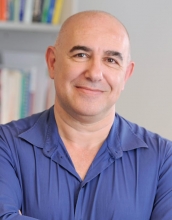 Abstract: Humans have been influencing the DNA of plants and animals for thousands of years through selective breeding. Yet, it is only over the last three decades or so that we have gained the ability to manipulate the DNA itself and directly alter its sequences through the modern tools of genetic engineering. This has revolutionized biotechnology and ushered in the era of synthetic biology. Among the possible applications enabled by synthetic biology is the design and engineering of feedback control systems that act at the molecular scale in real-time to steer the dynamic behavior of living cells. Here, I will present our theoretical framework for the design and synthesis of such control systems and will discuss the main challenges in their practical implementation. I will then present the first designer gene network that attains integral feedback in a living cell and demonstrate its tunability and disturbance rejection properties. A growth control application shows the inherent capacity of this integral feedback control system to deliver robustness and highlights its potential use as a universal controller for regulation of biological variables in arbitrary networks. Finally, I will discuss the potential impact of biomolecular control systems in industrial biotechnology and medical therapy and bring attention to the opportunities that exist for control theorists to advance this young area of research.

Bio: Mustafa Khammash is the professor for control theory and systems biology at the Department of Biosystems Science and Engineering at ETH Zurich, Switzerland. He works in the areas of control theory, systems biology and synthetic biology. His lab develops theoretical, computational and experimental methods aimed at understanding the role of dynamics, feedback and randomness in biology. He is currently developing new theoretical and experimental approaches for the design of biomolecular control systems and for their realization in living cells. Khammash received his bachelor's degree from Texas A&M University in 1986 and his doctorate from Rice University in 1990, both in electrical engineering. In 1990, he joined the engineering faculty of Iowa State University, where he created the Dynamics and Control Program and led the control group until 2002. He then joined the engineering faculty at the UC Santa Barbara, where he was director of the Center for Control, Dynamical Systems and Computation until 2011, when he joined ETH Zurich. He is a fellow of the IEEE, IFAC and the Japan Society for the Promotion of Science.