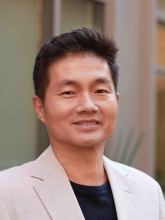 Abstract: When an object (e.g., boat) moves in a liquid (e.g., water), friction drag impedes its motion, consuming energy and limiting speed. Since maritime transportation alone accounts for a significant portion of the global oil consumption and greenhouse gas generation, a reduction of water drag by even a small fraction would lead to a global benefit. Because the skin friction drag is the largest portion of the total drag experienced by most water vehicles, numerous mechanisms to reduce skin friction have been explored for decades. However, none has been widely accepted because of poor energy efficiency. About a decade ago, superhydrophobic (SHPo) surfaces started to receive significant attention because the air layer between water and the surface can lubricate the water flows, decreasing the skin friction. Unlike other existing gas-lubricating methods, SHPo surfaces would hold a gas layer (called plastron) within the microscopic structures on the surface, making it possible to reduce skin friction without consuming energy to provide the gas. Despite two decades of research, however, drag reduction with SHPo surfaces has not been obtained for the most coveted application example, i.e., high Reynolds number flows in open water. This talk will present our recent achievement, i.e., the first successful large drag reductions (~30%, up to ~40%) with SHPo surfaces using credit-card-size samples tested underneath a boat on the sea at high Reynolds numbers. The results attest the importance of microscopic nuances of SHPo surfaces even for macroscale applications.

Bio: Professor CJ Kim received his bachelor's degree from Seoul National University, master's degree from Iowa State University, and doctorate from UC Berkeley, all in mechanical engineering. He joined the faculty at UCLA in 1993. Holding the Distinguished Professor title and the Volgenau Endowed Chair in Engineering, he directs the Micro and Nano Manufacturing Lab to perform research in MEMS and nanotechnology, including design and fabrication of micro/nano structures, actuators and systems, with a focus on the use of surface tension. The recipient of the Research Excellence Award (Iowa State University), TRW Outstanding Young Teacher Award (UCLA), NSF CAREER Award, ALA Achievement Award, Samueli Outstanding Teacher Award (UCLA), and Ho-Am Prize in Engineering, Kim has served on numerous professional and governmental committees and panels in MEMS and nanotechnology, including general chair of the 2014 IEEE International Conference on MEMS. An ASME fellow, he is currently serving as senior editor of the IEEE Journal of MEMS and on the Editorial Advisory Board for IEEJ Transactions on Electrical and Electronic Engineering. He has also been active as a scientific adviser, consultant and founder of start-up companies.