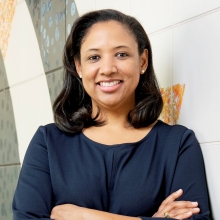 Zoom link to be distributed by CBE department (For non-UCI persons: see link below to register )
Kristala L. Jones Prather

Abstract: Microbial systems offer the opportunity to produce a wide variety of chemical compounds in a sustainable fashion. Economical production, however, requires processes that operate with high titer, productivity and yield. One challenge toward maximizing yields is the need to use substrate for biomass, resulting in a competing pathway that cannot merely be eliminated. Productivities may also be significantly influenced by the timing of expression of genes in the production pathway. Dynamic metabolic engineering has emerged as a means to address these and other impediments in strain performance. Ideally, the triggers for dynamic control would be autonomous, that is, independent of any external intervention by the operator. We have developed such autonomous devices based on pathway-independent quorum-sensing circuits and have demonstrated their utility across several distinct metabolic pathways and with varying levels of complexity. In this talk, I will describe our approach for development of these metabolite valves and results to date from their implementation.

Bio: Kristala L.J. Prather is the Arthur D. Little Professor in and executive officer of the Department of Chemical Engineering at MIT. She received a bachelor's degree from MIT in 1994 and doctorate from UC Berkeley (1999), and worked four years in BioProcess Research and Development at the Merck Research Labs prior to joining MIT. Her research interests are centered on the design and assembly of recombinant microorganisms for the production of small molecules, with additional efforts in novel bioprocess design approaches. A particular focus is the elucidation of design principles for the production of unnatural organic compounds with engineered control of metabolic flux within the framework of the burgeoning field of synthetic biology. Prather is the recipient of an Office of Naval Research Young Investigator Award (2005), a Technology Review “TR35” Young Innovator Award (2007), a National Science Foundation CAREER Award (2010), the Biochemical Engineering Journal Young Investigator Award (2011) and the Charles Thom Award of the Society for Industrial Microbiology and Biotechnology (2017). Additional honors include selection as the Van Ness Lecturer at Rensselaer Polytechnic Institute (2012), and as fellow of the Radcliffe Institute for Advanced Study (2014-2015), the American Association for the Advancement of Science (AAAS; 2018) and the American Institute for Medical and Biological Engineering (AIMBE; 2020).