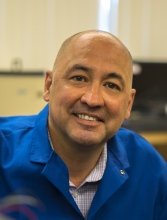 Abstract: The discovery of unique thermal properties in graphene stimulated experimental, theoretical and computational research directed at understanding phonon transport and thermal conduction in two-dimensional material systems [1-3]. In the first part of the talk, I will review the history and recent results in the graphene thermal field, indicating open physics questions and providing comparison of different experimental and computational approaches. The extremely high thermal conductivity of graphene, its mechanical flexibility and comparatively low cost have also led to an explosive growth in research focused on thermal management applications of graphene. In the second part of the talk, I will review results pertinent to graphene’s use as fillers in various thermal interface materials. Specifically, I will address the issue of thermal percolation in graphene composites and recent results for graphene-enhanced thermal paste, which meets industry’s requirements for thermal management of advanced electronics [3-4]. [1] A. A. Balandin, et al., Nano Lett., 8, 902 (2008); A. A. Balandin, Nature Mat., 10, 569 (2011); [3] D. L. Nika and A. A. Balandin, Reports on Progress in Physics, 80, 36502 (2017); [4] F. Kargar, et al., ACS Appl. Mater. Interfaces, 10, 37555 (2018).

Bio: Alexander A. Balandin received his master's degree, summa cum laude, in applied physics and mathematics from the Moscow Institute of Physics and Technology, Russia. He received his doctorate in electrical engineering from the University of Notre Dame. From 1997 till 1999, he worked as a research engineer in the Department of Electrical Engineering at UCLA. In 1999 he joined UCR, where he is presently Distinguished Professor of Electrical and Computer Engineering, UC Presidential Chair Professor of Materials Science and Engineering, director of the Phonon Optimized Engineered Materials Center, director of UCR’s nanofabrication facility, and associate director of DOE EFRC Spins and Heat in Nanoscale Electronic Systems Center. Balandin is a founding chair of UCR's campuswide materials science and engineering program. His research interests cover a wide range of nanotechnology, electronics, materials science and thermal fields. Professor Balandin is a recipient of The MRS Medal (2013) from the Materials Research Society for his discovery of the unique heat-conduction properties of graphene, and of the IEEE Pioneer of Nanotechnology Award (2011) for his nanotechnology research. He is an elected fellow of eight professional societies: MRS, APS, IEEE, OSA, SPIE, IOP, IOM3 and AAAS. He is among the Clarivate Analytics and Thomson Reuters highly cited researchers. He serves as deputy editor-in-chief of the Applied Physics Letters. For more information, visit his group web-site: http://balandingroup.ucr.edu/