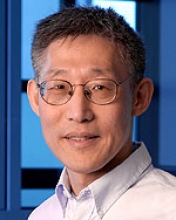 Department of Materials Science and Engineering
University of Pennsylvania, Philadelphia

Abstract: Resistance memory is a two-point thin-film bipolar device with a resistance set at 0 or 1 by voltage. The most commonly studied resistance memory has a wide band-gap insulator such as HfO2, which requires a large voltage to break down the initial resistance (10 GW), leaving one or two conducting filaments that can later work as two-way switches. However, we have also doped many amorphous insulators with atomically dispersed metal atoms to obtain thin films that are conducting in the 10 nm regime, and they, too, are voltage switchable, but apparently uniformly instead of filamentarily. Recently, we further found amorphous Si and Ge are likewise nanometallic in that their 10 nm films are conducting, and after widening their band gap by O or N doping, they again become switchable uniformly. I will describe all three types of memory materials by a unified picture. (a) The conducting paths systematically evolve from one-dimensional filaments to three-dimensional networks as the band gap decreases. (b) Switching is controlled by a Coulomb blockade from trapped electrons that accompany conformational changes at soft spots in the amorphous matrix. (c) Along the conducting paths, coherent electrons undergo 1D/3-D random walk with excellent conductivity despite a huge effective mass. (d) They are all electronic memories requiring no ion motion and operable at the sub-picosecond speed. This insight is obtained by breaking the devices, pressing them in a liquid tank, hitting them with a high-energy (22 GeV) electron fireball and chilling them to 18 mK while applying a magnetic field (18 Tesla). Together, they provided filament/network statistics, triggered electro-phonon interaction and conformational changes, and availed coherent electrons that follow the magnetic perturbation in Aharonov-Bohm oscillations or other variations.

Bio: I-Wei Chen (B.S.in physics, 1972, Tsinghua; M.S. in Physics, 1975, Penn; Ph.D. in metallurgy,1980, MIT) is the Skirkanich Professor of Materials Innovation at University of Pennsylvania. Chen has former appointments at University of Michigan and MIT. An author of over 100 papers in the Journal of the American Ceramic Society on oxide and nitride research, his journal papers have been cited more than 12,000 times with an ISI h-index of 62. He holds 15 U.S. patents and conducts current research on thin film memory devices, energy ceramics and drug delivery.