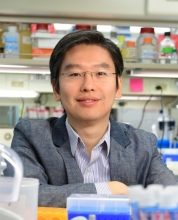 Abstract: Emerging research of the human microbiome has generate new insights into the role of human-associated microbes in health and disease. In particular, microbes that colonize the gastrointestinal tract play a central role in host metabolism, immunity, and homeostasis, and can change in response to external perturbations such as dietary alterations, chemical exposures, and physiological or psychological stressors. However, the microbiome field currently lacks essential microbial engineering and synthetic biology tools, which are key roadblocks in the path towards next-generation microbiome-based products and therapies. In this talk, I will describe our various efforts to address these challenges including generation of new microbiome chasses using large-scale automation, multiplex construction and characterization of new genetic parts for non-model microbes, high-resolution delineation of spatiotemporal properties key to microbiome function and stability, recording of biological events in using engineered DNA-based cellular memory, and in situ manipulation of microbial communities directly within the mammalian host. These next-generation microbiome analysis and engineering tools provide a foundational platform for bridging synthetic biology technologies to the microbiome field.

Bio: Harris Wang is an assistant professor at Columbia University jointly appointed in the Department of Systems Biology and the Department of Pathology and Cell Biology. Wang received his bachelor's degrees in mathematics and physics from MIT and his doctorate in biophysics from Harvard University. His research group mainly develops enabling genomic technologies to characterize the mammalian gut microbiome and to engineer these microbes with the capacity to monitor and improve human health. Wang is an investigator with the Burroughs Wellcome Fund and the recipient of numerous awards, including the NIH Director’s Early Independence Award, NSF CAREER, Sloan Research Fellowship, ONR Young Investigator, Schaefer Scholars and Forbes’ 30 Under 30 in Science. In early 2017, Wang received the Presidential Early Career Award for Scientists and Engineers (PECASE) from President Obama, which is “the highest honor bestowed by the United States Government on science and engineering professionals in the early stages of their independent research careers.”