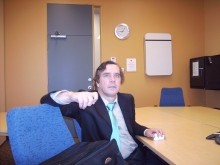 In this talk novel carbon micro- and nanofabrication strategies are discussed. The new methods disclosed here fall into the following six categories:

Through mechanical forcing: Electrohydrodynamic forces applied by using electrospinning unwind and orient the molecular chains of a non-graphitizing carbon precursor such as polyacrylonitrile (PAN). Subsequently, exerting mechanical stresses further enhances the molecular alignment of the polymer chains during the formative crosslinking phase. The stabilized polymer precursor is then pyrolyzed at 1050° C and exhibits a uniformly graphitized structure, abundant in edge planes, with enhanced electrical and electrochemical performance. The promising sensing performance of the thus-developed carbon electrodes is attributed to the presence of a high level of pyridinic and graphitic nitrogens (in case of PAN as the precursor), as confirmed by X-ray photoelectron spectroscopy. The results demonstrate that, despite their simple fabrication, the electrodes developed from pyrolytic carbon nanofibers in this way are comparable with their sophisticated nitrogen-doped graphene counterparts.

Hydrographic carbon: Through lithography on photoresist films that are not attached to a solid surface (e.g. photoresist films floating on a liquid) the freedom in manufacturing different types of shapes is dramatically enhanced. For example, thinner films can be processed that can then be transferred to non-planar substrates to affect non-planar lithography. Moreover, it is now possible to have these films self-assemble into free-standing 3D shapes e.g. through capillary forces (see next).

Carbon capillary origami: Thin PDMS films have been used for capillary origami as a simple route to fabricate complex three-dimensional structures. The big disadvantage with this strategy is that the 3D structures go back to their planar configuration after the liquid - providing the assembling force for the origami- evaporates. In contrast we demonstrate here that with free-standing photoresists films using the hydrographic technique introduced above we can now freeze the shape of the self-assembling structure by cross-linking in free-form polymer manufacturing or after pyrolysis of the polymer precursor shape in free-form carbon manufacturing.

Microstructure studies of carbon: The extreme temperatures reached during the Joule heating of a suspended carbon nanowire allow for the study of microstructural transformations of glassy carbon. Using TEM on suspended wires after Joule heating at temperatures above 3000° C the suspended fibers reveal both fullerenic rings and fringes indicating graphitization.

Chemical vapor deposition (CVD): Using Joule heating, local chemical vapor deposition (LCVD) enables one to deposit a wide variety of materials on a suspended hot carbon nanowire without depositing on the low temperature nanowire suspending contact structures. Although this technique was introduced by our team some years ago, we now finally are able to provide details on the control of the LCVD deposition process.

Nano-gap and nano-constriction formation in suspended carbon nanofibers: Nanogaps and nanoconstrictions in suspended carbon nanowires were made through precise voltage application in a controlled environment (high vacuum after flushing with CO2). The breakdown at the center of the suspended wires can be controlled to produce nanogaps. When etching reactions dominate the carbon removal process - typically with traces of remaining oxygen- smooth surfaces and large gaps (> 100 nm) result. In the absence of oxygen, it is carbon sublimation that controls the carbon-removal mechanism resulting in sub-20 nanometer gaps (as small as 4 nm) but the nanogap features rough surfaces. Recently, we have found that CVD coating on the suspended wires with a thin layer of SiO2  before voltage breakdown affords small gaps while also maintaining a smoother surface and without the need for precise voltage application.

Through thermal pretreatment of a PAN electrospinning ink before the actual spinning one improves both the viscoelasticity and the carbonization process and as a result, we are now able to fabricate sub-20 nanometer suspended carbon fibers in near-field electrospinning. The results obtained here are now combined with the results reported under Section 4 in an attempt to pattern sub-20 nanometers wires with a 500 nm spacing.

A bottom-up synthesis approach for the fabrication of gold nanoparticle (GNP) carbon composite thin films is demonstrated. A model explaining the in-process gold salt reduction, nucleation and growth of the gold particles will be advanced. Furthermore, guided thin film wrinkling induced by a photo-crosslinking gradient will be presented. Finally, a selectively triggered synthesis of GNPs in carbon fibers is revealed. In the latter, the photoresist containing a gold salt composition is pretreated by a focused energy source to initiate the local reduction of the metal precursor as well as for creating heterogeneous sites to increase the kinetics of nucleation and growth of the gold.

Bio: Before joining UCI as the Chancellor’s Professor in mechanical and aerospace engineering, Madou was vice president of Advanced Technology at Nanogen in San Diego, California. He specializes in the application of miniaturization technology to chemical and biological problems (BIO-MEMS), and is the author of several books in this burgeoning field he helped pioneer, both in academia and in industry. Madou founded several micromachining companies and has been on the board of many more. Many of his colleagues became well known in their own right in academia and through successful MEMS startups. Madou was the founder of the SRI International’s Microsensor Department, founder and president of Teknekron Sensor Development Corp. (TSDC), visiting Miller Professor at UC Berkeley and an endowed chair at the Ohio State University (professor in chemistry and materials science and engineering). He is the author of the third edition of  “Fundamentals of Microfabrication,” an introduction to MEMS and NEMS, which has become known as the “bible” of micromachining (http://fundamentalsofmicrofabrication.wordpress.com/). Madou's h-index is 72. Some of his current research work involves a compact disc-based fluidic platform and carbon MEMS, both fields he pioneered. To learn more about those recent research projects, visit www.biomems.net.