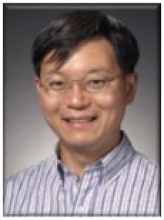 Abstract: The advent of polymeric soft materials has been strongly impacting the fields of MEMS and NEMS for the past two decades, eventually establishing an exciting new field of soft-MEMS & NEMS. Currently, researchers are not only producing bendable or stretchable versions of existing devices but also devising new devices with the deformability in mind from inception.

This talk will present recent examples of such "deformation-critical" soft-MEMS & NEMS developed in the presenter’s lab. His research has consistently demonstrated that polydimethylsiloxane (PDMS), the flagship material for soft-MEMS and NEMS, can be machined into surprisingly robust microscale/nanoscale devices with the help of a variety of unconventional fabrication techniques, despite its inherent softness.

The presenter has applied these new findings to deformable optics and microrobotics, producing upright PDMS micropillars with record-high aspect-ratios and a microscale pneumatic robot-arm that can mimic the multiturn spiraling motion of biological tentacles. Using the material’s deformational interaction with rigid nanostructures, the presenter has also shown that triboelectric surface charge can be induced on PDMS surfaces in a highly organized, nanoscale patterned fashion. Utilization of such a nanopatterned surface charge for nanomanufacturing will also be discussed.

Bio: Jaeyoun (Jay) Kim received his doctorate in electrical engineering from the University of Michigan at Ann Arbor in 2003 with his thesis research on integrated optics and fiberoptics directed by Professors Kim A. Winick and Mohammed N. Islam. For his postdoctoral study, Kim joined the BioPOEMS research group of Professor Luke P. Lee at UC Berkeley where his research dealt with biomimetic optical systems and plasmonically engineered nanostructures. In 2006, he joined the Department of Electrical and Computer Engineering at Iowa State University where he is currently an associate professor. His current research interests include unconventional MEMS, bioinspired optics and plasmonics. Kim is a recipient of the National Science Foundation's Faculty Early Career Development Award (2010). He also has received the Warren B. Boast Undergraduate Teaching Award (2008), Harpole-Pentair Developing Faculty Award (2009-2010) and Air Force Summer Faculty Fellowship (2009).