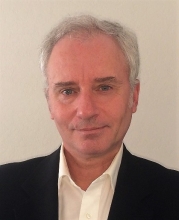 Professor of Mechanical and Aerospace Engineering
University of California, Irvine

Abstract: Compliance with airport noise regulations remains a major hurdle for the development of future civil supersonic aircraft. These aircraft would be powered by advanced turbofan engines whose high-speed jet exhaust on takeoff creates sound levels far above those of the current subsonic fleet. Research at UC Irvine has shown the potential for noise reduction by asymmetric shaping of the exhaust plume. The seminar will review recent experimental efforts as well as the development of methodologies for low-cost, physics-based prediction of the noise reduction.

Bio: Dimitri Papamoschou is a professor of mechanical and aerospace engineering at UC Irvine. He received his doctorate in aeronautics at Caltech. His research interests include compressible turbulence, jet and fan aeroacoustics, and advanced noise source imaging methods. In jet aeroacoustics, he has shown the potential for noise reduction by asymmetric distortion of the jet velocity field, a concept that has led to several patents. He is a fellow of the American Institute of Aeronautics and Astronautics (AIAA) and recipient of the 2017 AIAA Aeroacoustics Award.