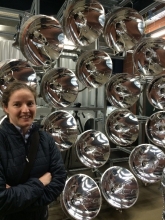 Abstract: The functionality of photo-driven electrochemical devices relies on complicated and coupled multiphysics processes, occurring at multiple temporal and spatial scales. Device modeling can actively and efficiently support the choice of the most promising – in terms of efficiency, cost, robustness, scalability and practicability – conceptual design pathways, material choices and operating approaches1.

Haussener will discuss the merit of and lessons learned from device models incorporating different degrees of complexity and dimensionality. She will focus on cost competitive photoelectrochemical (PEC) devices relying on morphologically complex particle-based photoelectrodes. Modeling of such devices requires the use and connection of molecular-scale (DFT), meso-scale (nano-tomography-based approaches) and macro-scale models. She will further discuss the modeling and scaling of PEC devices utilizing concentrated irradiation. Utilization of concentrated radiation requires implementation of the locally resolved energy conservation equation2 in order to determine if such devices are feasible and to understand how thermal management can be used to ensure high-performance operation. The use of controlling strategies to ensure robust device operation is specifically discussed in the light of such devices exposed to non-predicable disturbances. She also will touch on the importance of understanding and managing degradation. Finally, Haussener's talk will address ongoing scaling approaches by her lab for the design, implementation and testing of these devices, in order to bridge the gap between research and practical application.

Bio: Sophia Haussener is an assistant professor heading the Laboratory of Renewable Energy Science and Engineering at the Ecole Polytechnique Fédérale de Lausanne. Her current research is focused on providing design guidelines for thermal, thermochemical and photoelectrochemical energy conversion reactors through multiphysics modeling. Her research interests include thermal sciences, fluid dynamics, charge transfer, electro-magnetism and thermo/electro/photochemistry in complex multiphase media on multiple scales. She received her master's degree (2007) and doctorate (2010) in mechanical engineering from ETH Zurich. Between 2011 and 2012, she was a postdoctoral researcher at the Joint Center of Artificial Photosynthesis and the Energy Environmental Technology Division of the Lawrence Berkeley National Laboratory. She has published over 60 articles in peer-reviewed journals and conference proceedings and two books. She has been awarded the ETH medal (2011), the Dimitris N. Chorafas Foundation award (2011), the ABB Forschungspreis (2012), the Prix Zonta (2015) and the Global Change Award (2017), and she is a recipient of a Starting Grant of the Swiss National Science Foundation (2014). She is a deputy leader in the Swiss Competence Center for Energy Research on energy storage, serves as an associate editor for the Journal of Renewable and Sustainable Energy and acts as a member of the Scientific Advisory Council of the Helmholtz Zentrum.