CEE Seminar: Do You Know Where Your Catchment Ends? The Role of Interbasin Groundwater Flow and Hydrogeologic Transience in Hydrologic Processes 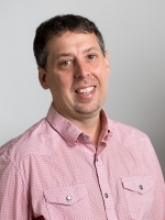 Abstract: A fundamental concept in the hydrologic analysis of watersheds is that the water draining to the outlet of the basin originates within the basin itself. Groundwater hydrologists have long understood the role and impact of interbasin groundwater flow, defined here as the subsurface transfer of water across topographic boundaries. This interbasin transfer of water leaves a distinct impact on the hydrologic and solute budgets of the catchments. This talk addresses when and where topographic catchment divides correspond to groundwater divides and how this is affected by climatic variability and geologic heterogeneity. Examples from a range of climates and geologic environments (northern Chile, Great Basin of the United States, Trinidad and Tobago, and coastal Massachusetts) will highlight the relevance of interbasin flow on hydrologic and geologic processes. Additionally, the coupling of hydrologic transience and changes in groundwater storage is also discussed, since these two processes are often difficult to separate in practice. Finally, I present recommendations and suggestions for new approaches to conceptualization of hydrogeologic watershed boundaries that take into consideration both geologic uncertainty and climate variability.

Bio: David Boutt is an associate professor in the Department of Geosciences at the University of Massachusetts-Amherst.  He received B.S. and M.S. degrees from the Department of Geological Sciences at Michigan State University in 1997 and 1999. His master's work focused on understanding the impacts of land-use change on groundwater quantity and quality at the watershed-scale. He earned his Ph.D. from the New Mexico Institute of Mining and Technology (Socorro, N.M.) in 2004 and held a postdoctoral position at Sandia National Laboratories before joining the faculty at UMass-Amherst in 2005. During his Ph.D. research he was awarded an AGU Horton Research Grant. Boutt’s dissertation work focused on the coupling of fluid flow and deformation in fractured and faulted media through the development of discretely-coupled fluid-solid models. His current research program focuses on understanding the role of groundwater in catchment-scale hydrologic processes. This involves delineating the contribution of groundwater storage to stream flow generation, spring discharge and hydrologic budgets. He maintains an active and dynamic research laboratory with dedicated students ranging from undergraduates to Ph.D. students. His research interests have taken him on board the Japanese Drilling Vessel Chikyu during IODP Expedition 319 – the first riser drilling operation in IODP history – to the wild of the Atacama desert in Chile.  Some of his current work is focused on understanding the origin of lithium-rich continental brines in northern Chile and in the Great Basin of the western United States. Boutt has also contributed extensively to understanding the hydrogeology of a former cranberry bog that is part of the largest freshwater restoration project in New England (http://www.livingobservatory.org/). A list of his publications can be found at https://blogs.umass.edu/dboutt/. Boutt has served the hydrogeologic and broader geoscience communities by serving on proposal review panels and volunteer boards. He has been a member of GSA since 1997 and has convened many topical sessions at GSA national meetings. Currently an editor for the journal Hydrological Processes, he was previously an associate editor for Hydrogeology journal.

Background of the Birdsall-Dreiss Lectureship 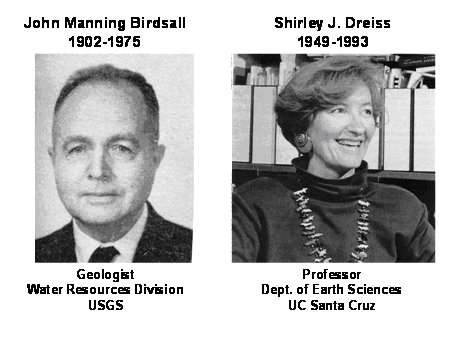 The Birdsall Lectureship began in 1978, as part of a bequest left to the Geological Society of America – Hydrogeology Division in memory of John Manning Birdsall. Birdsall was a prominent geologist, retired from the Water Resources Division of the U.S. Geological Survey. He was a scientist, a dedicated public servant and a gentleman. The bequest was used to provide travel funds for outstanding scientists working in the field of hydrogeology to visit other institutions and give talks on their research. The first lecturer, Jacob Bear from the Israeli Institute of Technology, visited only the University of Wisconsin – Madison, which hosted one of the premier hydrogeology programs of that era. The subsequent list of Birdsall-Dreiss lecturers includes many outstanding scientists from academia and government. The number of institutions visited by each lecturer grew rapidly, with recent lecturers typically giving 40 to 50 talks, mainly in the U.S. and Canada, but also in Europe, Asia and Australia.

One of the most popular Birdsall Lecturers was Shirley Dreiss from the University of California, Santa Cruz. Shortly after her very successful 1992 lecture tour, Dreiss was killed in an auto accident. Her many friends and admirers honored her by contributing to the GSA Birdsall Lectureship, which was renamed the Birdsall-Dreiss Lectureship. The Birdsall-Dreiss Lecturer is chosen each year by a panel of former B-D lecturers. There are no applications for this position and they make their choice solely on the reputation of perspective candidates for their research excellence and ability to communicate.

The Birdsall-Dreiss endowment pays for part of their travel, and candidates typically obtain additional travel funds from their home institution. Universities or other institutions wishing to host a Birdsall-Dreiss lecture send an application in the fall, with the tour officially starting each January and ending at the fall meeting of the Geological Society of America.

Birdsall-Dreiss Distinguished Lecturer Description: The lecturer shall be selected based on outstanding contributions to hydrogeology or a closely related field through original research and public communication, and the potential for continued contributions to the profession.