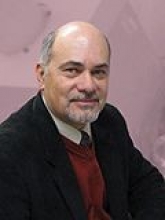 Abstract: Platinum Group Metal-free (PGM-free) catalysts have been extensively developed for both Proton Exchange Membrane (PEM) and Alkaline Exchange Membrane (AEM) fuel cells for automotive, stationary and portable applications. In this lecture we will address the challenges that our team has faced on the way to practical application of such catalysts. The UNM team has developed the Sacrificial Support Method (SSM) as a main approach for templated synthesis of hierarchically structured electrocatalysts materials. In this method the catalysts precursors are absorbed, impregnated within or mechanically mixed with a support typically composed of mono-dispersed or meso-structured structured silica. This support is then thermally processed (pyrolyzed) and then removed by etching (in KOH or HF) to leave the open frame structure of a “self-supported” material that consists of the catalysts alone.

The makeup and structure of the active site/sites of the PGM-free ORR electro-catalysts, including geometry (coordination) and chemistry (composition and oxidation state), remain contentious even after 50 years of research. There is an emerging agreement that the iron and nitrogen functionalities, displayed on the surface of the carbonaceous substrate/support, govern ORR activity. This is often combined with a broadly accepted hypothesis that micro-porous surface area plays a critical role in forming the active site. Candidate structures participating in ORR include multitudes of nitrogen defect motifs in the carbon matrix of different degrees of graphitization, with metal incorporated as metal nano-particles, corresponding (native) oxides and/or as atomically dispersed, oxidized metal species, linked (coordinated) to nitrogen defects in carbonaceous matrix in a variety of possible configurations. This lecture will attempt to address rational design metrics of M-N-C electrocatalyst based on a broad experimental set of data.

Bio: Plamen Atanassov graduated from the University of Sofia (1987), specializing in chemical physics & theoretical chemistry.  He joined the Bulgarian Academy of Sciences (BAS) and was a member of the technical staff of its Central Laboratory of Electrochemical Power Sources (now the Institute for Electrochemistry & Power Systems). His initial work included materials solutions for metal-air batteries. He was a visiting scientist at the Frumkin’s Institute of Electrochemistry, in Moscow, Russia, studying bio-electrochemistry of enzymes, and received a Ph.D. in physical chemistry/electrochemistry from BAS.

Atanassov moved to the United States in 1992 and joined the research faculty at the University of New Mexico. During the '90s, he was involved in the development of several electrochemical biosensor technologies for biomedical, environmental, food safety and defense applications. In 1999, Atanassov joined Superior MicroPowders LLC (acquired later by Cabot Corp.), where he was a project leader in fuel cell electrocatalysts development, and introduced spray pyrolysis for catalyst synthesis on an industrial scale. He returned to UNM in 2000 as a faculty member of the chemical & nuclear engineering department. In 2007, Atanassov founded the UNM Center for Emerging Energy Technologies (CEET). From January 2012 to December 2013, he was the associate dean for research of the UNM School of Engineering. Currently, Atanassov is a Distinguished Professor of chemical & biological engineering and chemistry & chemical biology. Since 2015, he has been the director of the UNM Center for Micro-Engineered Materials (CMEM). Atanassov is affiliated with Los Alamos National Laboratory and is a honorary professor at BAS. He serves as a vice president of the International Society of Electrochemistry and is a fellow of the Electrochemical Society.

Atanassov's materials for energy programs are focused on development of novel electrocatalysts: non-platinum electrocatalyst for fuel cells, nano-structured catalysts for oxidation of complex fuels, and new materials and technologies for energy conversion and storage. His bio-electrocatalysis programs range from enzyme electrochemistry, enzymatic and microbial fuel cells, to systems for biological and bio-inspired energy harvesting.