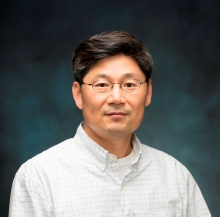 Abstract: Graphene is a truly 2D electronic material with a very high intrinsic saturation velocity of ~5x107 cm/sec, approximately five times higher than silicon, and a record mobility, which gives it great potential for electronic applications. By leveraging its high mobility, flexibility and ability to be integrated into any substrate and Si-CMOS, graphene-based RF devices and circuit operations are potentially disruptive, and this talk will show why. Recently, we developed bandgap engineering of graphene with fluorine doping and demonstrated graphene-heterostructure FETs with Ion/Ioff ratio of > 105.The talk will also touch on opportunities and challenges in making the 2D materials for widely-adopted RF electronics such as health IoT.

Bio: Jeong-Sun Moon (F’14) received B.S and M.S. degrees from Seoul National University, Korea, and a Ph.D. degree in 1995,from Michigan State University, where he studied electron quantum transport in nanoscale devices and software-defined digital transceivers. In 1995, he joined Sandia National Laboratories as a postdoctoral scholar, where he worked on III-V semiconductor nanoscale devices including 2D-2D resonant tunneling transistors. In 2000, Moon joined HRL Laboratories in Malibu, Calif.; he currently is a senior research scientist at HRL Laboratories. He has managed numerous research contracts from DARPA, ONR, NRO, JPL and NASA, and his research focuses on emerging materials/devices and RF/high-speed devices/circuits including GaN, InP, GaSb, SiGe, graphene and phase-change material, as well as optical devices. He has published two book chapters, has authored or co-authored more than 100 papers and holds 20 patents. Moon also has given numerous invited conference and workshop presentations and tutorials/ short courses. His work was featured in various magazines, including IEEE Spectrum, Compound Semiconductor, NASA Tech Briefs, Microwave Journal and MIT Technology Review. He served on the program committee for the Device Research Conference, and is a member of the technical program committee for the Microwave Theory and Techniques Society (MTT-S).

Moon is a Fellow of the IEEE and a recipient of the George Abraham Outstanding Paper Award from the Government Microcircuit Applications and Critical Technology Conference (GOMACTech) in 2014, and the NASA SPACE ACT Board Award in 2009.