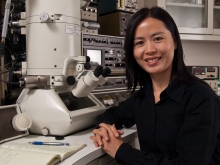 Abstract: Solid-liquid interfaces play an important role in various applications ranging from solution-based synthesis to energy conversion and storage, materials corrosion protection and water separation. An understanding and ultimately controlling of the dynamic processes of materials at solid-liquid interfaces govern the success and lifetime of functional devices and components. In the past few years, my group has been studying materials transformations primarily by developing and applying liquid environmental electron microscopy. In this talk, I will first show our study of nanoparticle growth mechanisms in solution. It is known that catalysis and other surface-enhanced properties of nanoparticles are highly dependent on their shape and surface structures. However, how facets develop and how nanocrystal morphology evolves in solution during synthesis is largely unknown. Using liquid environmental cell electron microscopy, we have directly observed single particle growth trajectories that reveal an unprecedented level of information. For instance, by tracking the facet development during Pt nanocube growth, we found rules that are applied to bulk materials, e.g., a widely accepted surface-energy minimization theorem (Wulff construction), break down at the nanoscale. Instead, a stochastic nature dominates and the individual facet development is highly influenced by the kinetics and selective bonding of ligands to a surface. In addition to noble metal nanoparticles, we have also been able to obtain transition metal-oxide nanostructures in a liquid cell and reveal their formation pathways. I will show our very recent results on imaging of two dimensional (2D) cobalt-oxide nanosheet formation, as an example. In the second part of my talk, I will present our study of electrochemical processes relevant to batteries using in situ electrochemical liquid cells. Dissolution deposition at the electrode-liquid electrolyte interfaces and phase transformations of the precipitates during charge cycles in lithium ion nanobatteries will be discussed.

Bio: Haimei Zheng has been a staff scientist in the Materials Sciences Division at Lawrence Berkeley National Laboratory since 2010. She is also an adjunct professor in the Materials Science Department at UC Berkeley. Zheng earned her Ph.D with Professor Ramamoorthy Ramesh and Professor Lourdes Salamanca-Riba at the University of Maryland, College Park. She completed her doctoral project at UC Berkeley after she moved with Ramesh. Thereafter, she became a postdoc with Professor Paul Alivisatos in chemistry at UC Berkeley and jointly at the National Center for Electron Microscopy of Lawrence Berkeley National Laboratory. Zheng currently researches physical and chemical processes of materials with a focus on materials transformations and dynamic phenomena at solid-liquid interfaces. Her primary approach is developing and applying in situ liquid environmental electron microscopy. Zheng has 90 publications with the total citations of more than 10,000 times and an H index of 36. She received the LBNL Director’s award for exceptional scientific achievements in 2013 and the DOE Office of Science Early Career Award in 2011. More information is available at http://haimei.zheng.lbl.gov