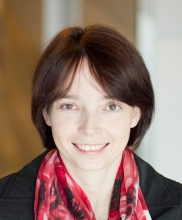 Department of Electrical Engineering
University at Buffalo, the State University of New York

Abstract: Structured light and structured matter are two fascinating branches of modern optics that recently started having a significant impact on each other. The synergy of complex beams, such as the beams carrying an orbital angular momentum (OAM), with nanostructured engineered media is likely to bring new dimensions to the science and applications of structured light ranging from fundamentally new regimes of spin-orbit interaction to novel ways of information encoding for future optical communication systems. However, integrating structured light, which commonly is created using bulk optics, on miniaturized silicon chips represents a significant challenge. We will discuss fundamental optical phenomena at the interface of singular and nonlinear optics in engineered optical media and show that the unique optical properties of optical nanostructures open unlimited prospects to engineer light itself. We present theoretical and experimental studies of light-matter interactions of vector and singular optical beams in optical nanostructures and microcavities. In particular, we propose several approaches to ultra-compact structured-light-wavefront shaping using metal-dielectric and all-dielectric resonant metasurfaces. Moreover, by exploiting the emerging non-Hermitian photonics design at an exceptional point, we demonstrate a microring laser generating a single-mode OAM vortex lasing with the ability to precisely define the topological charge of the OAM mode. We show that the polarization associated with OAM lasing can be further manipulated on demand, creating a radially polarized vortex emission. Our OAM microlaser could find applications in the next generation of integrated optoelectronic devices for optical communications in both quantum and classical regimes. Finally, we discuss our recent studies of nonlinear structured light propagation and necklace beam formation in soft-matter media, such as colloidal suspensions, that offer a promising platform for engineering polarizabilities as well as large and tunable nonlinearities. These results may be of interest for imaging and spectroscopic applications using light propagating in highly scattering biological and chemical media.

Bio: Natalia Litchinitser is a professor of electrical engineering at University at Buffalo, the State University of New York. Her group's research focuses on fundamental properties and applications of structured light in engineered nanostructures, biomedical imaging, optical communications and nonlinear optics. Litchinitser serves as optics and photonics area coordinator in the Department of Electrical Engineering. Litchinitser earned her doctorate in electrical engineering from the Illinois Institute of Technology and a master’s degree in physics from Moscow State University in Russia. She completed postdoctoral training in Professor Govind Agrawal’s research group at the Institute of Optics, University of Rochester in 2000. Litchinitser joined the electrical engineering faculty at the State University of New York at Buffalo as assistant professor in 2008. She was promoted to associate professor with tenure in 2011, and to professor in 2014. Litchinitser previously held a position as a member of the technical staff at Bell Laboratories, Lucent Technologies and as a senior member of the technical staff at Tyco Submarine Systems. She has authored seven invited book chapters and over 150 journal and conference research papers. She is a Fellow of the Optical Society of America, a Fellow of the American Physical Society, and a senior member of the IEEE. She holds grants from the Army Research Office, Office of Naval Research, National Science Foundation and Department of Energy. She is a recipient of the 2014 Exceptional Scholar Award for Sustained Achievement and of the 2015 School of Engineering and Applied Sciences Senior Researcher of the Year Award.