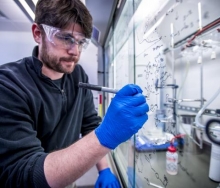 Abstract: Early disease detection and diagnosis requires sensing of minute quantities of biomolecules in drawn fluids or imaging localized abnormalities in the body. Improvement upon existing technologies will require development of agents that can change their structure in response to the presence of an elevated biomarker with sufficient sensitivity, ignore the many other biomolecules present and signal the positive result. This talk will address efforts in the Goodwin Lab to develop such technologies based on colloidal interactions and assemblies. In the first part of the talk, I will show how tuning interactions between colloids can be implemented for sensitive detection of biomolecules both inside and outside the body. “Sandwich” structures, in which two biomolecules bind to the same target analyte, are a core technology of gold-standard biosensing assays such as ELISA, but most assays require extensive washing to remove background and nonspecifically binding proteins, which increases assay time, cost and error. Here, we have utilized the nucleic acid-driven formation of colloidal dimers for detection of biomolecules. In one case, we developed mutually reactive reagents that produce a fluorescent signal after aggregation and content mixing. In another case, the alignment of fluorocarbon droplets in an acoustic field allowed vaporization and detection by clinically relevant ultrasound. In the second part of the talk, I will discuss our recent work on engineering interfaces to facilitate transient liquid vaporization by acoustic pulses. We have developed two strategies to formulate nanoscale structures that can produce detectable gas bodies on demand upon exposure to High Intensity Focused Ultrasound (HIFU). In one case, we studied the effect of lipid lateral phase separation on the surface of perfluorohexane nanodroplets, which created surface roughness that could stabilize nascent bubble nuclei and promote vaporization. In a second approach, we engineered superhydrophobic surfaces using colloidal mesoporous silica with hydrophobic, nanoscale pores. These particles are currently being explored not only for imaging but also for breaking down tumor tissue for improved efficacy of chemotherapy towards solid tumors.

BIO: Andrew Goodwin is an assistant professor in the Department of Chemical and Biological Engineering at the University of Colorado at Boulder. His research focuses on designing “smart” colloids and materials that can sense their surroundings and change their chemical and physical properties accordingly. His group also explores how interfaces organize themselves when interacting with chemical stimuli and also how they respond to external forces, with the aim of utilizing these studies for building next-generation technologies in imaging, drug delivery and catalysis. He received a BA in chemistry from Columbia University and his Ph. D in chemistry from the University of California, Berkeley, where he was advised by Prof. Jean Fréchet. He has published ~30 peer-reviewed papers and has received an NIH New Innovator Award, an NIH Pathway to Independence Award, and a DOD Breast Cancer Postdoctoral Fellowship.