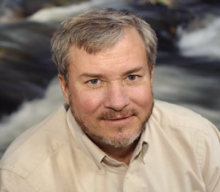 Abstract:
The Generalized Moisture Content Equation (GMCE) is a non-linear partial differential equation derived by using the implicit function theorem to convert the one-dimensional Richards’ equation into a form that describes the velocity of discrete water contents. In the classical Richards’ equation the advective and diffusive effects of gravity and capillarity are co-mingled, which, together with strongly non-linear soil constitutive relations, renders the numerical solution computationally expensive and unreliable in certain situations. However, in the GMCE the advection and diffusion terms are separate, which opens the door for novel solution methodologies. One such solution is to ignore the diffusion term and use the method of lines to convert the advection-like term into an ordinary differential equation (ODE) that is solvable using a finite moisture-content discretization. Numerically, this ODE can be solved using common solvers and the solution is guaranteed to converge and to conserve mass. Comparison of the advection-only GMCE solution against column data, numerical and exact analytical solutions of Richards’ equation show that neglecting the diffusion term introduces less than 1 percent error in cumulative infiltration. This development is truly transformative. All the reasons to avoid  the one-dimensional Richards’ equation in Earth system or large-scale hydrology or land-atmosphere models are gone. Because the GMCE solution calculates no spatial derivatives, which are very difficult to approximate in the case of sharp wetting fronts, it does not suffer from discretization errors. The degeneracy of Richards' equation near saturation is not a factor for the GMCE solution. Because of the computational efficiency and robustness of the GMCE solution, it is well-suited for inverse problems such as estimating soil hydraulic properties from repeat remote sensing observations. The GMCE method is being used in the development of a high-performance computing hydrological model called “ADHydro.”  ADHydro development will be described in the context of an NSF Water, Sustainability, and Climate project with INFEWS supplement aimed at identifying the effectiveness and value of Payments for Ecosystem Services scheme in the Panama Canal Watershed. ADHydro development is also being funded by NOAA for hyper-resolution simulations of large area hydrology, particularly in urban areas, nested within the new National Water Model. This talk will end with a look towards future research activities.

Speaker Bio:
Since 2006 Fred Ogden has held the position of Cline Distinguished Chair of Engineering, Environment, and Natural Resources at the University of Wyoming.  He is a tenured full professor in the Dept. of Civil & Architectural Engineering, and the Haub School of Environment and Natural Resources, and inaugural director of the Center for Computational Hydrology and Hydrosciences. From 1994 to 2005 he was an assistant and associate professor in the Dept. of Civil and Environmental Engineering at the University of Connecticut. Prior to that, he was a postdoctoral associate and research engineer at the University of Iowa, Institute of Hydraulic Research. Ogden has B.S., M.S., and Ph.D. degrees in civil engineering, all from Colorado State University. He has received awards for his research, teaching and service. Most recently in September of this year, he attended the International Association of Hydrogeologists Conference in Montpellier, France, to receive the “Coolest Paper Award” for the 2015 WRR paper he published with students and colleagues on the discovery of a completely new class of solution of Richards’ equation. In 2015 he received the “Arid Lands Hydraulic Engineering Award” from the American Society of Civil Engineers (ASCE). In 1999 he received the ASCE Collingwood Prize, the society-wide award recognizing an outstanding contribution  to the civil engineering literature by a younger society member, for a paper on sediment control at riverside cooling water intakes. His very first paper on the effectiveness of bentonite water well seals received an award in 1993. He is currently serving as P.I. of a $3.3M NSF water, sustainability and climate project with INFEWS supplement centered in the Panama Canal Watershed. From 2011-2014 Ogden was the University of Wyoming P.I. of an NSF EPSCoR cyberinfrastructure project joint with the Utah EPSCoR jurisdiction aimed at developing high-performance computing hydrological modeling capability to understand the impacts of water management and climate change on water availability in the Colorado River Basin. He enjoys field work in exotic locales as much as hydrological modeling. While on sabbatical leave at the National Water Center in Tuscaloosa, Alabama, during the 2015-2016 academic year, he and wife Michelle traveled to 13 countries on four continents. His hobbies include playing bass guitar, construction and woodworking, and rebuilding classic 1940’s Willys jeeps.