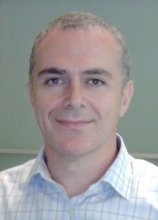 Abstract: The question of how difficult or easy it is to control a certain network of interconnected dynamical agents is fundamental to understanding engineered or naturally occurring networks, such as vehicular formations or  power grids, among many others. I will argue that standard notions of stability as a binary property (i.e. a system is either stable or not), convergence rates, or even reachability Grammian analysis may fail to predict the behavior of large networks. This motivates a notion of network controllability based on the best-achievable-performance in optimal control problems with structural constraints. While such problems are known to be generally intractable, I will show certain examples from vehicular platoons and power grids where informative and simple answers are possible in the asymptotic limit of large system size. This analysis gives asymptotic bounds on network performance and shows its dependence on both the complexity of individual node dynamics, as well as network connectivity.

Biography: Bassam Bamieh is professor of mechanical engineering at UC Santa Barbara. His research interests are the fundamentals of Control and Dynamical Systems such Robust, Optimal and Distributed Control, as well as the applications of systems and feedback techniques in several physical and engineering systems, including shear-flow transition and turbulence, and the use of feedback in thermoacoustic energy-conversion devices. He is a past recipient of the National Science Foundation CAREER award, the AACC Hugo Schuck Best Paper Award and the IEEE Control Systems Society G. S. Axelby Outstanding Paper Award (twice). He was elected a Distinguished Lecturer of the IEEE Control Systems Society (2005), a Fellow of the International Federation of Automatic Control (IFAC) and a Fellow of the IEEE.