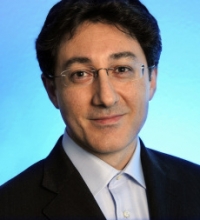 Abstract: Turbulence has an important influence on the transport of small particulate matter like dust in the atmosphere, fuel droplets in combustion chambers and small biological organisms in marine environments. The relative separation of small particles is strongly influenced by the multiscale space and time correlations of the turbulent velocity field. We present recent results on the dispersion of particle pairs studied by means of fully resolved high-resolution and high-statistics direct numerical simulations [1,2]. We further discuss a recently proposed sub-grid Lagrangian model capable of reproducing the effect of unresolved eddies on single tracers dynamics (absolute dispersion) as well as on their relative separation. The proposed model is simple, computationally efficient and is capable of reproducing the relative separation dynamics between pairs in a cloud composed by an arbitrary number of tracers [3].

Biography: Professor Federico Toschi holds the chair of Computational Physics of Multiscale Transport Phenomena in the Department of Physics and in the Department of Mathematics and Computer Science at Eindhoven University of Technology. The CPMTP section has recently been established within the 3TU Centre of Excellence for Multiscale Phenomena. Toschi's research interests include fluid dynamics turbulence, statistical physics, micro and nano-fluids, numerical methods for fluid dynamics and high-performance computing. The focus of his current research are multiscale problems related to the physics of fluid studied by means of state-of-the-art computational models. He has been awarded large scale computational grants (DEISA Extreme Computing Initiative, PRACE) to study the dynamics of heavy particles in turbulence and hemodynamics. Toschi is the founder and administrator of the International CFD Database hosted at CINECA (Bologna, Italy), http://cfd.cineca.it. He served as chairman of the International Collaboration for Turbulence Research (ICTR, http://www.ictr.eu). He acted as chair of the COST Action MP0806 on "Particles in turbulence" and is currently chair of the COST Action MP1305 "Flowing matter".