ChEMS Seminar: Hide and Seek in the Open Sea 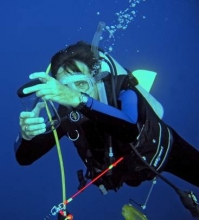 Abstract: The open ocean, which comprises over 99.5% of the earth’s biosphere, is an exceptionally difficult place to hide. The background is nearly featureless, predation is intense, and there is nothing to hide behind. Because most oceanic animals approach any object, complete invisibility is usually the only successful strategy. Therefore animals in the open ocean have evolved a number of strategies that are absent or rare in other environments. Many species -- including jellyfish, worms, snails, fish, and squid -- are simply transparent, some extraordinarily so. While highly cryptic, this strategy is difficult for many organisms, because it primarily relies on reducing the scattering of light, which is problematic for larger and more complex species. Those that cannot be transparent generally hide themselves via a combination of colors, mirrors and lights. Cryptic coloration can be particularly challenging in open water because the colors of the background and the illumination often co-vary in non-intuitive ways. In addition, because ocean animals are often preyed upon from below, they need to mask their silhouettes. This is often done by covering the ventral surface with organic light sources that mimic the intensity, spectrum, and angular distribution of the downwelling light. Mirrors are perhaps the most successful solution for oceanic camouflage and are used to cover both entire animals and organs that cannot be made transparent, such as guts. Because the underwater light field is often nearly symmetric, a vertical mirror can be highly cryptic. Evolution has favored vertical mirrors, even to the point of orienting the mirrors within curved fish scales to maintain their vertical orientation, and analyses have shown that mirrored camouflage is more robust to changing optical conditions than camouflage based on coloration. The central difficulty of this method –  that the light field is not always symmetric –  may be overcome by the adaptive mirrors recently found in some species that can rapidly change their reflectance. All of these strategies have led to counter-strategies designed to break camouflage, the best studied of which are ultraviolet and polarization vision and filters within the eye.

Biography: Originally trained in mathematics and art, Sönke Johnsen has studied camouflage, signaling, and non-human visual modalities for the last 25 years. He is particularly interested in vision and camouflage in the open ocean, but has also worked on coastal and terrestrial species, magnetoreception, nocturnal illumination, and human cataracts. His research combines mathematical analyses with behavioral and morphological studies and in situ measurements and observations. His field work primarily involves open-ocean research cruises that use SCUBA and deep-sea submersibles. In addition to exploring the evolution and diversity of the optical and visual tricks that animals perform, Johnsen is interested in improving communication between theoretical and experimental scientists and between scientists and artists. Outreach is a strong focus and his research has been presented in numerous magazines, newspapers and television shows. In his spare time, he is an avid nature photographer.