Microbial Miners Could Help Humans Colonize the Moon and Mars 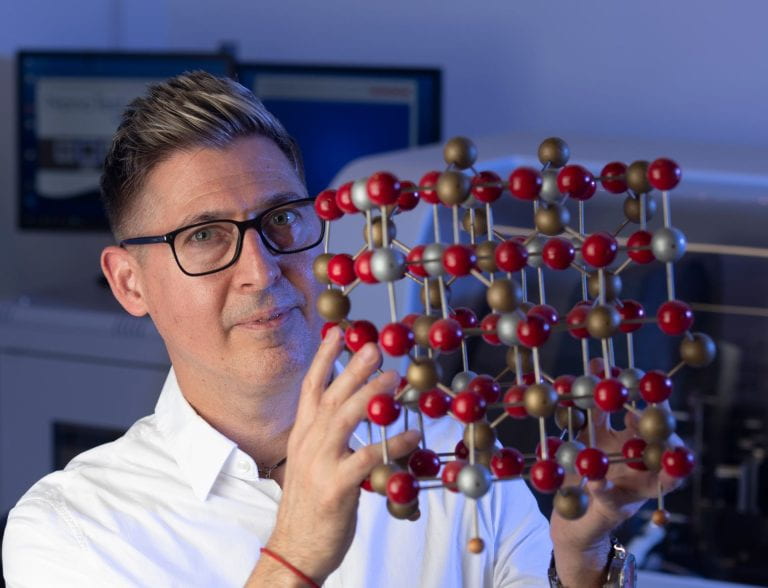 Dec. 8, 2022 - The biochemical process by which cyanobacteria acquire nutrients from rocks in Chile’s Atacama Desert has inspired engineers at the University of California, Irvine to think of new ways microbes might help humans build colonies on the moon and Mars.

Researchers in UCI’s Department of Materials Science and Engineering and Johns Hopkins University’s Department of Biology used high-resolution electron microscopy and advanced spectroscopic imaging techniques to gain a precise understanding of how microorganisms modify both naturally occurring minerals and synthetically made nanoceramics. A key factor, according to the scientists, is that cyanobacteria produce biofilms that dissolve magnetic iron oxide particles within gypsum rocks, subsequently transforming the magnetite into oxidized hematite.

The team’s findings, which are the subject of a paper published recently in the journal Materials Today Bio, could provide a pathway for new biomimetic mining methods. The authors also said they see the results as a step toward using microorganisms in large-scale 3D printing or additive manufacturing at a scale that’s useful in civil engineering in harsh environments, like those on the moon and Mars.

“Through a biological process that has evolved over millions of years, these tiny miners excavate rocks, extracting the minerals that are essential to the physiological functions, such as photosynthesis, that enable their survival,” said corresponding author David Kisailus, UCI professor of materials science and engineering. “Could humans use a similar biochemical approach to obtain and manipulate the minerals that we find valuable? This project has led us down that pathway.”

The Atacama Desert is one of the driest and most inhospitable places on Earth, but Chroococcidiopsis, a cyanobacterium found in gypsum samples collected there by the Johns Hopkins team, has developed “the most amazing adaptations to survive its rocky habitat,” said co-author Jocelyne DiRuggiero, associate professor of biology at the Baltimore university.

“Some of those traits include producing chlorophyll that absorbs far-red photons and the ability to extract water and iron from surrounding minerals,” she added.

Using advanced electron microscopes and spectroscopic instruments, the researchers found evidence of the microbes in the gypsum by observing how the very minerals contained within were transformed.

“Cyanobacteria cells promoted magnetite dissolution and iron solubilization by producing abundant extracellular polymeric substances, leading to the dissolution and oxidation of magnetite to hematite,” DiRuggiero said. “Production of siderophores [iron-binding compounds generated by bacteria and fungi] was enhanced in the presence of magnetite nanoparticles, suggesting their use by the cyanobacteria to acquire iron from magnetite.”

Kisailus said the way the microorganisms process metals in their desolate home made him think about our own mining and manufacturing practices.

“When we mine for minerals, we often wind up with ores that may present challenges for extraction of valuable metals,” he said. “We frequently need to put these ores through extreme processing to transform it into something of value. That practice can be monetarily and environmentally costly.”

Kisailus said he is now pondering a biochemical approach using natural or synthetic analogs to siderophores, enzymes and other secretions to manipulate minerals where only a large mechanical crusher currently works. And taking a leap from here, he said there could also be a way to get microorganisms to employ similar biochemical capabilities to produce an engineered material on demand in less-than-convenient locations.

“I call it ‘lunar forming’ instead of terraforming,” Kisailus said. “If you want to build something on the moon, instead of going through the expense of having people do it, we could have robotic systems 3D-print media and then have the microbes reconfigure it into something of value. This could be done without endangering human lives.”

He added that humans don’t always need to use Edisonian approaches to figure out how to do things.

“This is the main theme of my Biomimetics and Nanostructured Materials Lab. Why try to reinvent the wheel when nature’s perfected it over hundreds of millions of years?” Kisailus said. “We just have to extract the secrets and blueprints for what nature does and apply or adapt them to what we need.”

This project was funded by the Army Research Office and was aided by instruments made available by the Department of Energy’s Office of Science. The research team also included Wei Huang, a postdoctoral scholar in Kisailus’ lab group; Taifeng Wang, Ph.D., who recently graduated from UCI and is now employed at Intel; and Cesar Perez-Fernandez in Johns Hopkins University’s Department of Biology.

About UCI’s Brilliant Future campaign: Publicly launched on Oct. 4, 2019, the Brilliant Future campaignaims to raise awareness and support for UCI. By engaging 75,000 alumni and garnering $2 billion in philanthropic investment, UCI seeks to reach new heights of excellence in student success, health and wellness, research and more. The Henry Samueli School of Engineering plays a vital role in the success of the campaign. Learn more by visiting https://brilliantfuture.uci.edu/the-henry-samueli-school-of-engineering.