Accomplished engineer is recognized for contributions to nanotechnology, microscopy 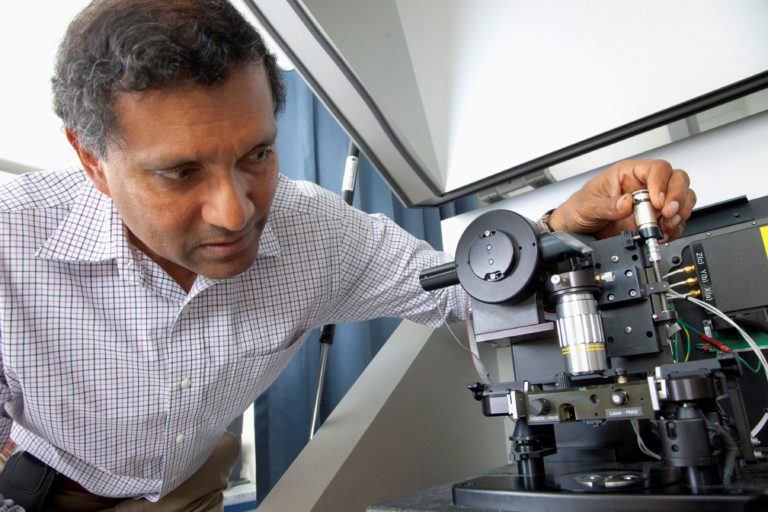 “I am thrilled and humbled to have been elected a fellow of the Royal Society, the oldest science academy in the world, which has elected to its fellowship most of the scientific giants of all time,” said Wickramasinghe, a highly decorated academic leader who holds joint appointments in UCI’s biomedical engineering and materials science & engineering departments. “It is rewarding to see organizations with global stature putting the spotlight on the work I have done in my career and especially here at UCI.”

After earning bachelor’s and doctoral degrees in electronic & electrical engineering at King’s College London and University College London, respectively, Wickramasinghe spent a lengthy career at IBM, where he tackled the problem of characterizing computer chips and devices that were rapidly shrinking beyond what could be seen with visible wavelength microscopes.

Since joining UCI in 2006, Wickramasinghe has continued to pursue enhancements to nanoscopic devices and techniques for studying atoms, molecules and chemical bonds, with the goal of one day being able to take movies of the surfaces of these objects. Another major thrust has been to build instruments to improve the understanding of biological processes and enable rapid, point-of-care diagnosis of bacterial and viral infections.

“Essentially, I am a tool builder,” said Wickramasinghe, who’s also the Henry Samueli Endowed Chair in Engineering. “The work I did in the past has impacted many areas of physics and chemistry, and lately I’ve tried to develop instruments that make a difference in biology, healthcare and the life sciences.”

A recipient of the 2014-15 Distinguished Faculty Award for Research from the UCI Academic Senate, Wickramasinghe also is a member of the National Academy of Engineering; an IBM Fellow and a member of the IBM Academy of Technology; and a fellow of the American Physical Society, the Institute of Physics, the Institute of Electrical & Electronics Engineers, the Royal Microscopical Society and the National Academy of Inventors.

Founded in 1660, the Royal Society is the world’s oldest scientific academy in continuous existence and an independent scientific academy of the United Kingdom. The fellowship of the Royal Society comprises more than 1,460 of the most distinguished scientists from the United Kingdom, other Commonwealth countries and the Republic of Ireland, as well as over 170 foreign members.

Wickramasinghe will be formally inducted into the Royal Society in a ceremony in London on July 12.