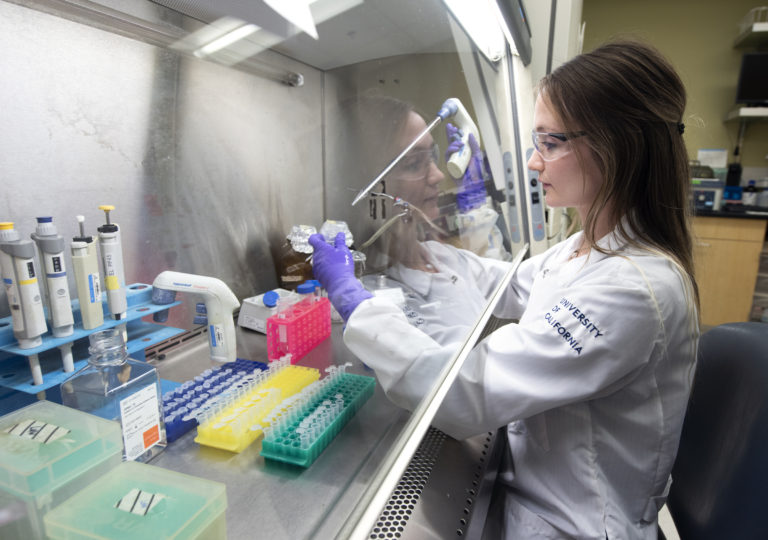 In a competition hosted by the Graduate Division, she was one of only four students awarded $12,000 2018-19 Public Impact Distinguished Fellowships for their research’s potential to improve the lives of others – and Thone’s work could do just that.

Her focus is personalized medicine – medicine that can be tailored to an individual patient – something that’s become increasingly popular in addressing cancer.

“When people think about designing personalized medicine,” Thone says, “they usually imagine using cells, because we can take those from the patient, manipulate them as we need to and then put them back into the body, where they’ll be recognized as ‘self’ and won’t be attacked by the body’s own immune system.”

The problem is that living cells are unstable and can actually be co-opted by cancer cells. 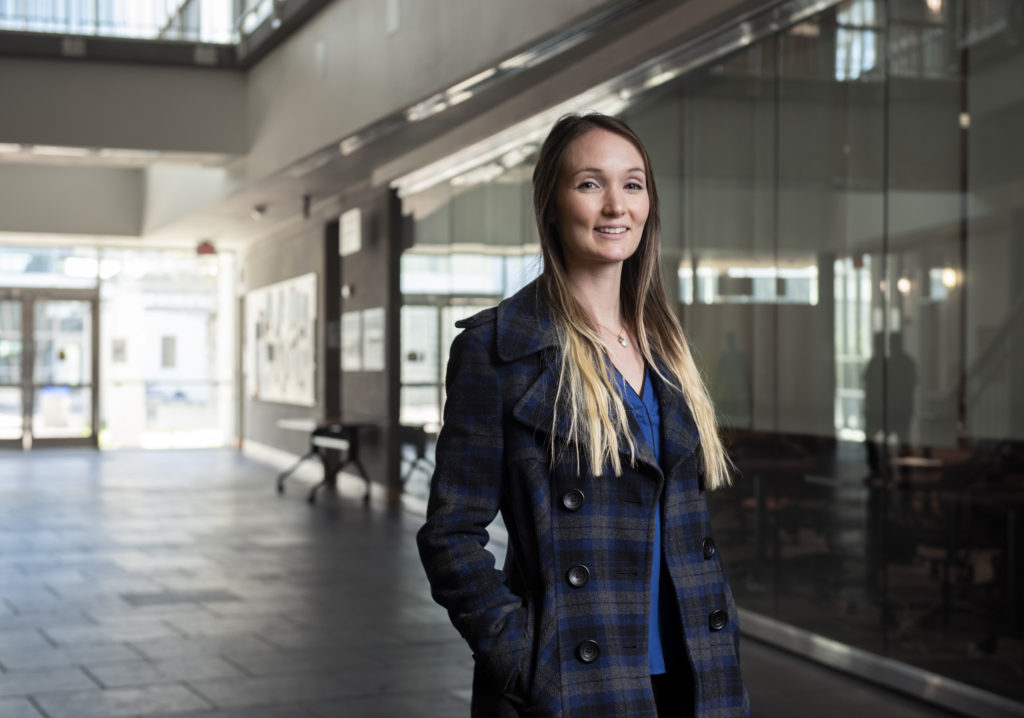 Thone and her colleagues in Young Jik Kwon’s BioTherapeutics Engineering Laboratory are trying to avoid this danger by developing a cancer vaccine that utilizes “blebs.” These are cell extensions identical to normal cells on the outside but simpler on the inside, with no nucleus (the control center of a cell). Importantly, they cannot be taken over by cancer cells and can pass off information to T cells (the “fighter” cells) to generate a potent immune response against them.

The vaccine has been tested in a preventive model in which mice were vaccinated and then injected with cancer cells. “We saw tiny tumors develop, and then they completely went away,” Thone says, “whereas in our control mice, tumors developed and then just kept growing and growing until the rodents died.”

According to the National Cancer Institute, about 38.4 percent of people will be diagnosed with cancer at some point in their lifetime. While this percentage is alarming, the five-year relative survival rate for all cancers combined is now over 69 percent; in the mid-1970s, it was under 50 percent. And the increase in this rate is expected to continue with treatment advances.

The research being conducted by Thone and her lab mates could further improve these numbers.

“Melissa’s contributions to the project have been crucial from its conception stage, as she was the key executioner of the idea in real lab settings,” says Kwon, a UCI professor of pharmaceutical sciences, biomedical engineering, molecular biology & biochemistry, and chemical & biomolecular engineering. “Her Public Impact Fellowship award is not only a reward for the impressive progress she has made so far, but also an announcement to the scientific community of her project’s great potential.”

Thone concurs: “The fellowship has enabled me to start sharing my work with others through conferences and training opportunities to advance the project, making translation of our vaccine to the real world an even closer reality. Additionally, the Public Impact Fellowship will aid in funding me through my fourth and fifth years of graduate school to ensure completion of my Ph.D. program.”

She’s currently testing the vaccine in a therapeutic model to see whether it can generate a potent enough immune response to eliminate existing tumors.

“In my lifetime, I don’t know if I’ll necessarily see a cure for cancer,” Thone says, “but I think that having a vaccine and being able to proactively prevent cancer would be huge on a global scale and give power back to the people.”