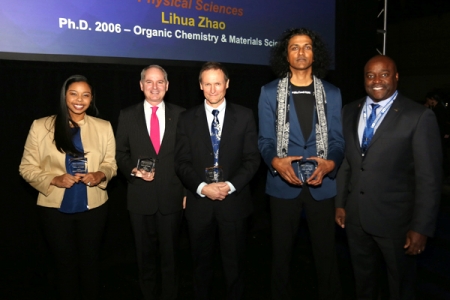 Feb. 21, 2019 - More than 300 alumni, family, faculty and friends from three UC Irvine schools – Samueli School of Engineering, Bren School of Information & Computer Sciences and School of Physical Sciences – gathered in early February for the 2019 Hall of Fame event at the historic Tustin Hangars.

Although the temperature inside the 17-story-tall wooden South Hangar was cool, the fascination with the venue was high. Designed and built during wartime in 1942, on a hyper-accelerated schedule, the two hangars on the site are each over 1,000 feet long and 300 feet wide. They were, and still are, two of the largest wooden structures ever built, earning their 1993 listing by the American Society of Civil Engineers as one of the Historic Civil Engineering Landmarks of the 20th Century.

“Bringing our alumni together in this impressive landmark location this year for the Hall of Fame is a momentous occasion,” said Samueli School Dean Gregory Washington. This is the fifth Hall of Fame event, and each school inducted four alumni. Washington introduced the engineers: Denis Bilodeau ’91, Jon Gribble ’83, Laura Wright Teclemariam ’04 and Ravi Valleti ’02.

Bilodeau, a registered civil and traffic engineer, is the manager of traffic and development services for the County of Orange. Since graduation, he has made significant contributions to the field of engineering, especially in the area of water resources. As the longest-standing board member of the Orange County Water District, he led the effort to design, finance and build the world’s largest water recycling facility, the Groundwater Replenishment System.

“I am very honored,” said Bilodeau. “I recall my time at UCI as the most challenging five years and four summers of my life. But, it prepared me well for my career, and I got a big bonus. I met my future wife freshman year in Mesa Court.”

The second awardee, Gribble, started as an engineer with Taylor-Dunn Manufacturing straight out of college in 1983. In 2010, he took over as Taylor-Dunn’s president until Polaris Industries purchased the company in 2016. Presently, Gribble is the director of engineering for the Polaris Commercial group, consisting of Taylor-Dunn, GEM and Pro XD work vehicles. His expertise in vehicle design, troubleshooting, contract negotiation and accident investigation requires him to travel worldwide.

Third up, Teclemariam addressed the audience on behalf of the engineering awardees. She brings over 15 years of high-tech experience working in product management, marketing and software engineering to Electronic Arts, one of the world’s largest video game publishers. “I remember I was not the smartest in the class, but I had the determination to work hard,” she said. “I was just intent on surviving the ‘three Lees’ (electrical engineering professors Chin Lee, Henry Lee and G.P. Li). In 2004, I was fortunate to work with Professor Glenn Healey on facial recognition technology; now we put facial recognition in our video games.”

As a lead product manager at EA, Teclemariam guides mobile studio products as well as subscription growth. Managing a portfolio of over $200 million across EA’s mobile platform, she works cross-functionally to scope, define and deliver EA’s premiere player experience. She has helped increase revenue for several products including Star Wars Battlefront, Star Wars Galaxy of Heroes, Pogo, Plants versus Zombies, FIFA Mobile and Mirror’s Edge, to name a few.

Last but not least, Washington introduced Valleti. After a few years as an engineer, Valleti decided to reconnect with acting, which he had enjoyed while growing up. STEM remains central in his life, and he continues to utilize his science and engineering background and organizational skills as he pursues new careers in acting, writing and teaching. A son of immigrants from India, Valleti began volunteering for social justice causes in 2016. He is a March for Science volunteer adviser, speaker and facilitator on #MarginSci equity and justice in STEM. He credits his senior honors thesis adviser, Ken Mease, and the UCI Flight Dynamics and Control Lab for showing compassion to students from marginalized backgrounds, like himself.