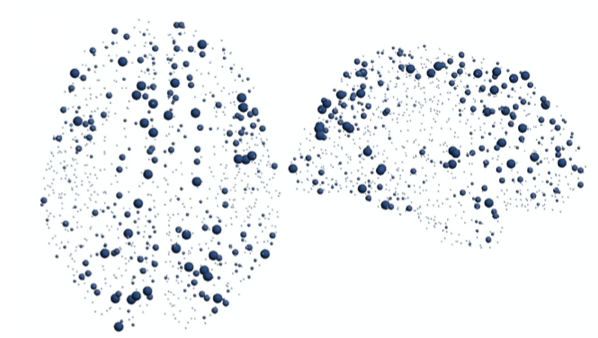 October 31, 2019 - With its 100 billion neurons connected in a sprawling and complex network, the human brain offers many challenges to scientists hoping to comprehend its structure. For a study published recently in Nature Communications, researchers at UCI, the University of Minnesota and other institutions employed an abstract geometric concept known as “network curvature” to elucidate the conduits between isolated regions of the brain. The project enabled the identification of important nodes that contribute to the brain’s overall robustness and ability – or inability – to overcome injuries, strokes or congenital defects. The network curvature analysis proved particularly useful in spotting age-related differences in brain structural connectivity, as well as anomalies having to do with neurodevelopmental disorders such as autism. Co-author Tryphon Georgiou, UCI Distinguished Professor of mechanical & aerospace engineering, said that peering into such properties with the tools of modern data science and advanced mathematics holds the promise of early detection and improved treatments. “The biological networks that may represent brain neuronal connectivity or gene regulatory interaction in cells require new ways of thinking for us to comprehend their remarkable properties of resilience or to pinpoint a potentially debilitating source of fragility,” Georgiou said. “It is often not the properties of the physical medium but of the ‘messaging highways’ in gene interactions or neuronal activities that dictate the outcome. For this reason, modern network science appears increasingly important in our quest to comprehend the world of biology.”