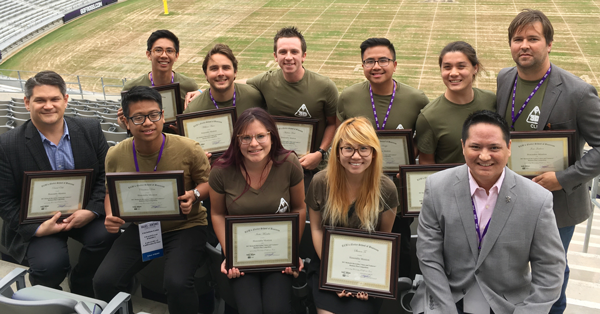 April 26, 2017 - A multidisciplinary team of UC Irvine undergraduate students from the schools of engineering and arts took fourth place in an international business competition with their bicycle-powered, sustainable, closed-loop 3-D printing process. The ambitious prototype, originally developed as a research endeavor, recently took a “serious turn toward entrepreneurship,” according to Jesse Colin Jackson, arts assistant professor and the team’s adviser.

Originally seed-funded by UCI’s MDP and UROP undergraduate research programs, the project took root in 2015, when the Samueli School participated in the Department of Energy-sponsored Solar Decathlon. Amos and Lupisan were designing a “tool room of the future” that included a 3-D printer for their team’s energy-efficient house. “We talked often about this concept but didn’t have the proper time or resources to actually put it into action,” Amos said of the bicycle-powered printing press that recycles and reuses plastic.

The team credits UCI’s Antrepreneur Center and Applied Innovation with its entrepreneurial progress; it will compete again next month at the Merage School’s New Venture Competition.

“When we couple our students to committed faculty and fantastic resources … they show us time and time again that they can compete with the best,” said Samueli School Dean Gregory Washington. “We add this to an already impressive string of recent accomplishments and I look forward to many other great outcomes.”