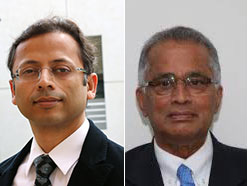 Nov. 15, 2017 - Two Samueli School faculty members have been recognized as among the world’s most influential scientific minds, according to the 2017 Highly Cited Researchers list published by Clarivate Analytics. The list of highly cited scholars includes preeminent researchers from around the world in 20 fields of the sciences and social sciences who have demonstrated great influence as measured by citations to their work.

The 3,300 researchers on this year’s list have distinguished themselves by publishing a large number of papers that rank in the top 1 percent most-cited in their fields over an 11-year period. This consistent production of highly cited work indicates these papers have been repeatedly judged by their peers to be of notable significance.

Syed Ali Jafar, professor of electrical engineering and computer science, made the Highly Cited Researchers list for the fourth consecutive year. He analyzes the capacity of wireless communication networks, and is best known for his influential work on the idea known as interference alignment. This concept demonstrates how a resource such as network bandwidth can be shared among competing users so that that each user gets half of the total bandwidth free from interference from others.

Jafar also received the 2015-16 UCI Distinguished Mid-Career Faculty Award for Research, and was awarded the 2015 Blavatnik National Award for Young Scientists in physical sciences & engineering, one of three winners chosen from among 300 candidates from highly ranked American universities and research institutions.

Satya Atluri, Distinguished Professor emeritus in mechanical and aerospace engineering, made the Highly Cited Researchers list for the third consecutive year. His research included inventing the so-called “meshless method” that has aided the design of safer materials for aircraft. His work encompassed theoretical, applied and computational mechanics of solids and fluids; and structural longevity, failure prevention and health management.

Atluri also has received India’s Padma Bhushan award in 2014 “for distinguished service of high order in the field of engineering and science.” In addition, he was the 2015 recipient of the American Institute of Aeronautics & Astronautics Walter J. and Angeline H. Crichlow Trust Prize, which recognizes a specific achievement or body of work that has become significant during the immediate past 15 years.