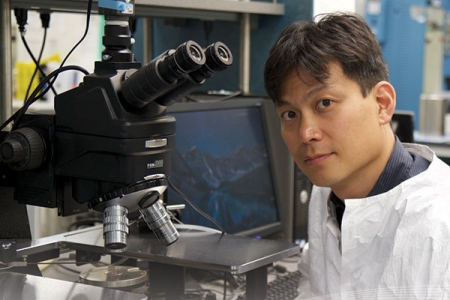 Sept. 29, 2016 - The Orange County Business Journal named UCI alumnus Benjamin Park, founder and chief technology officer of Enevate Corp., as a 2016 Innovator of the Year. The Innovator of the Year Awards recognize and celebrate individuals and their organizations who are creating game-changing products and services, and who demonstrate brilliance and leadership in innovation.

“Dr. Park’s contributions are especially notable as silicon anode technology rises in prominence in the lithium-ion (Li-ion) battery industry,” said Robert A. Rango, CEO of Enevate. “He pioneered the work in silicon anodes when he recognized the promise of the technology and the impact a better battery could have on the world.”

Park, who earned his doctorate in mechanical engineering (2006), founded Enevate in 2005 and now, as CTO, leads its battery research and development efforts. In addition to his significant academic achievements and many contributions to engineering research, Park has successfully helped raise some $60 million from venture capital and strategic corporate investors.

Not only is he the driving force behind Enevate’s innovative silicon-dominant batteries, Park’s unique technology represents a monumental advancement in energy density and ultrafast charging that hasn’t been seen in commercialized batteries to date. Where other battery innovations have historically required significant and expensive changes in the manufacturing process, Park’s battery design can be cost-effectively produced within the existing lithium-ion (Li-ion) manufacturing process.

“Ben Park has distinguished himself by creating a company that has great promise in a huge industry,” says Orange County Business Journal Publisher and CEO Richard Reisman. “Its credibility is validated by recruiting a seasoned tech executive to serve as CEO. It also delights me that even when great OC companies get acquired, we have companies like Enevate that avail themselves of the available talent.”

“It is my pleasure to accept this award from the esteemed Orange County Business Journal,” says Park. “I enjoy working with an exceptional team at Enevate which is supported by the dynamic greater Orange County ecosystem. I'm truly honored to be included within this group of recognized innovators.”