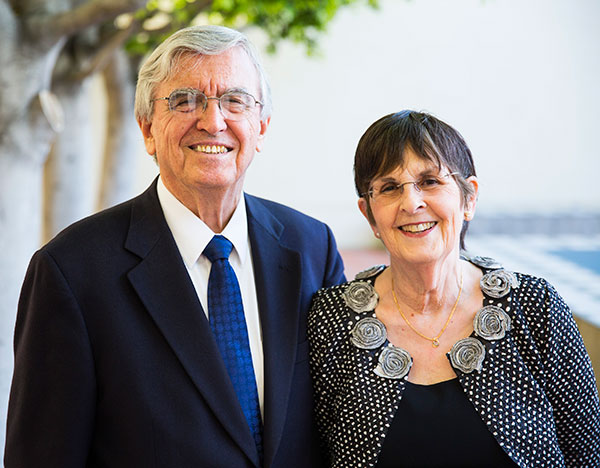 The $2 million endowment – $1.4 million from the Samueli Foundation, $100,000 from the Opus Foundation and $500,000 from a UC fund established to encourage development of endowed chairs universitywide – will support faculty salaries, graduate fellowships, teaching, research and service activities in EECS, the engineering school’s original department.

“This Presidential Chair is so significant because it is connected to one of our most important departments from the perspective of national impact,” said Gregory Washington, the Samueli School Stacey Nicholas dean of engineering. “EECS has been a pillar in the engineering school since its inception, and this endowment ensures the continued strength of our EECS department in the coming years.”

Nick Alexopoulos, who joined the UC Irvine faculty in 1997 as engineering school dean and EECS professor, quickly set about improving the school’s programs and facilities. He spearheaded creation of the National Fuel Cell Research Center and the Integrated Nanosystems Research Facility (INRF). He also established the first named school on UCI’s campus in 1999, when the engineering school formally became The Henry Samueli School of Engineering. Immediately thereafter he founded the Center for Pervasive Communications and Computing. The funding from these last two institutions helped him initiate, support and bring to reality the UCI branch of the California Institute for Telecommunications and Information Technology (Calit2). Alexopoulos also was responsible for successfully launching the Department of Biomedical Engineering in 2002.

During his tenure as dean, Alexopoulos, a member of the National Academy of Engineering and an ISI Highly Cited Author, also oversaw the creation of the Center for Engineering Science in Design, a multidisciplinary graduate program called “LifeChips” and the establishment of the Edwards Lifesciences Center for Advanced Cardiovascular Technology.

“This is an extraordinary surprise and honor for which I am grateful to Henry and Susan Samueli and Stacy Nicholas. Their friendship and support throughout the years of me, but most importantly of our students and faculty is exemplary,” Alexopoulos said. “I am also grateful to Dean Gregory Washington for initiating and bringing to reality this great honor and for establishing it in my department of electrical engineering and computer science.

“Finally, it has been a great privilege to be a faculty member of the University of California and I am thankful for this Presidential Chair which is in recognition of my dedication to our university for almost four decades.”

Sue Alexopoulos is a long-time supporter of the Samueli School and a charter member of the ARCS Foundation Orange County Chapter, which supports UCI graduate students studying science, medical research and engineering. She has also been active on the organization’s national board.

The former elementary school teacher, who also managed a small engineering consulting company, comes from a long line of engineers. “My grandfather was a civil engineer. My great uncle served as president of the AIEE (1949-1950). My father was a mechanical engineer. My brother was a computer engineer. My husband is an electrical engineer,” Sue Alexopoulos said. “I am very honored for this recognition. All the engineers in my family are honored as well.”

“It’s only fitting that if anybody in the history of this school was going to get this honor, it be Nick and Sue Alexopoulos,” said Washington.

Henry Samueli, co-founder of the Broadcom Corp. and chief technical officer of Broadcom Limited, concurred. “Nick Alexopoulos has been my colleague and mentor since my undergraduate days at UCLA. He has dedicated his career to advancing engineering education and creating the next generation of skilled engineers,” Samueli said. “He was a guiding force in shaping the Samueli School of Engineering at UCI, and I can’t think of a better way to honor his accomplishments than by naming this new presidential chair after him and his wife. I’m proud that the Samueli Foundation could play a role in creating this important chair, which will help ensure the future success of the Department of Electrical Engineering and Computer Science and the school itself.”

Stacey Nicholas, founder of the Opus Foundation and a member of the Samueli School’s Engineering Leadership Council and Diversity Advisory Board, also praised Alexopoulos’s contributions to the school and engineering community. “Nick Alexopoulos provided the leadership and vision that was key to transforming UCI into the world-class engineering school that it is today.  He is a true scholar, an excellent educator, and above all, an exemplary human being,” she said, calling him “one of the most inspiring figures I have ever known.”

“It is his tireless commitment to inspiring learning in young people that has made him a true hero in my mind.  He is completely committed to mentoring, motivating, and helping young people in any way that he can, and equally committed to furthering science and engineering education in the United States,” Nicholas added. “There is no one like him.  No one deserves this honor and this chair more than Nick Alexopoulos.”