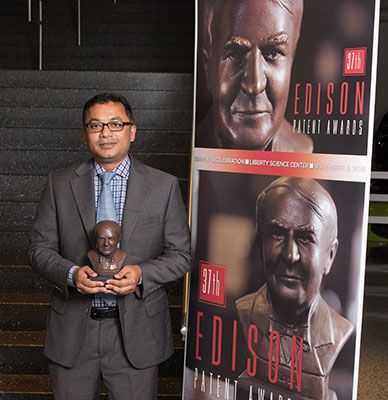 The award recognizes the most significant patents emerging from that state’s research community. Before joining UC Irvine in 2012, Al Faruque was a scientist at the Siemens Corporate Research and Technology center in Princeton, N.J., where the research originated; he continued his work on the algorithm at UCI through a Siemens/Department of Energy subcontract.

Along with his former colleagues, Al Faruque was honored in the energy category for a patent that offers a collaborative, networked energy management strategy for providing power to electric vehicle (EV) charging stations located in residential neighborhoods. The distributed system maximizes the number of charged EVs in a neighborhood while reducing local energy demands on the electricity infrastructure.

The N.J. Research & Development Council, comprised of representatives from academia, government and industry, established the award in 1980 in honor of Thomas Edison’s 1,093 patents and his contributions to creating New Jersey’s history of innovation.

“This was amazing to receive an award in the name of one of the greatest scientists and engineers of the 20th century,” Al Faruque said. “More interestingly, the award is for the sustainable energy sector, and Edison, even in his time, said: ‘I’d put my money on the sun and solar energy. What a source of power! I hope we don’t have to wait until oil and coal run out before we tackle that.’”