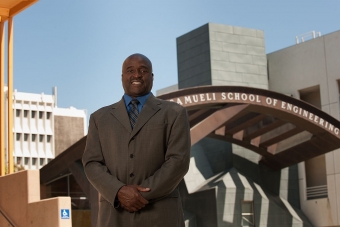 The American Society of Mechanical Engineers (ASME) has named Samueli School of Engineering Dean Gregory Washington a Fellow in recognition of his outstanding engineering achievements. The ASME Committee of Past Presidents confers the Fellow grade of membership on worthy candidates.

A professor in mechanical and aerospace engineering, Washington has served as Samueli School dean since August 2011. The citation reads, “Washington has earned outstanding reputations for scholarship and education, while providing exemplary service to ASME at local and national levels. He is internationally known for research on ultra-lightweight structurally active antenna systems and other structures using smart materials. He has served as dean of two engineering programs and is the first permanent African-American dean of engineering at any of the University of California campuses. Washington has received numerous teaching awards, directly instructed hundreds of undergraduates, and graduated 40 graduate students. He has served as an advisor to the Air Force and the National Science Foundation.”