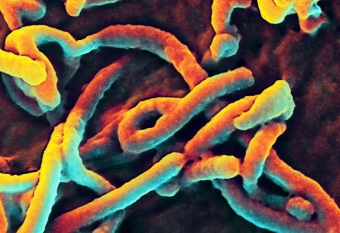 Michelle Digman and her research on VP40, one of seven proteins that create the Ebola virus, was featured recently in the Orange County Register. An assistant professor of biomedical engineering and director of the Laboratory for Fluorescence Dynamics, Digman’s work has also recently been published in the journal Viruses.

Digman uses a fluorescent imaging technique to observe cells that are inserted with the VP40. The protein is tagged with fluorescent green as a marker. Through a microscope, she and her team watch the protein replicate itself over and over using the cell’s own machinery to exit and infect other cells. This process is the same way Ebola spreads through the human body. As stated in the Register article, the protein “clusters near the cell membrane, bending that ultra-thin layer and pushing it outward in buds packed with VP40. Eventually, these buds drift away to infect other cells. And as UCI scientists examine the protein, they collect data that researchers and public health officials need to develop a cure.

“The fluorescent imaging technique that Digman – who often talks at local schools and science fairs – and her team use was developed over the last 15 years by a team of scientists, three of whom were awarded the Nobel Prize in chemistry this year. And when Digman started imaging VP40 three years ago, it was the first time any scientist had done so in real time.”

Professor Chang Liu has created an engineered living cell with a second DNA replication system that mutates independently of and without harming the cell’s original genome. This parallel replication cell works like a two-lane highway -- with a fast lane and a slow lane -- for direct evolution in a lab setting. With it, biomedical engineers will be able to rapidly evolve a huge array of biomolecules with custom desired functions. Liu and his research group published their work in the March issue of Nature Chemical Biology.

The parallel replication system designed by Liu can be made highly error-prone without hurting the genome, and any gene encoded on the new system will undergo rapid evolution. “Genes of interest placed in the fast lane can potentially evolve thousands to millions of times faster than they would if they were encoded in the genome, or the slow lane,” says Liu.