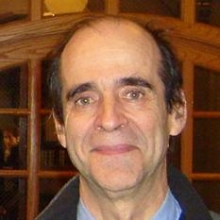 Abstract: The application of electric (or magnetic) fields at the interface between insulating and conducting (or magnetic and nonmagnetic) fluids leads to meniscus shape deformations, often resulting in conical tips. We have investigated these features in two contexts relevant to electrical propulsion.

1: Electrified liquid cones produce a so-called Taylor cone-jet, whose apex emits a thin jet. In highly conducting electrolytes, this jet may have nanometer dimensions, or even be absent, with just ions evaporating from the apex. Here we combine measurements of particle velocity u and stopping voltage x  of an ionic liquid electrosprayed in vacuum. Paradoxically, ions and particles of given u have well-defined x(u), which may be substantially larger or smaller than the voltage of the electrode supporting the meniscus. The observation is rationalized through a two-stage process: first a single jet accelerates up to its breakup point (at velocity uj and electrical potential xj). Next, the remaining electrical potential xj is turned reversibly into kinetic energy separately for each drop with given mass/charge, resulting in the final velocity u(x) measured. This scenario enables the determination of the jet speed and diameter at breakup, revealing also the power irreversibly dissipated and the corresponding heating of the fluid.

2: Magnetized ferrofluid menisci often adopt approximately conical shapes, which for unclear reasons have tip curvatures of 10-100 mm. We will describe experimentally the characteristics of these tips for ferrofluids of increasing magnetization, including tip radii as small as 7 mm. We find that the internal magnetic field gradients often are capable of concentrating the magnetic particles in regions of maximal field.

Bio: Juan Fernandez de la Mora has been a professor in Yale’s mechanical engineering department since 1992. After earning an undergraduate degree in 1975, he worked for two years in the Spanish aeronautical industry, obtained a Ph.D. in chemical engineering at Yale in 1980, and did postdoctoral work at UCLA on particulate transport in the atmosphere. As an assistant professor at Yale, he worked on the kinetic theory of disparate mass mixtures. Since 1990 he has studied the fluid dynamics of electrified menisci, including their analytical applications involving ionization, ion mobility and mass spectrometry. He has developed aerodynamic devices to separate small particles and molecular ions, including their applications to detect explosive vapors in the atmosphere. He has an interest in the heterogeneous nucleation of vapors on nanometer particles.