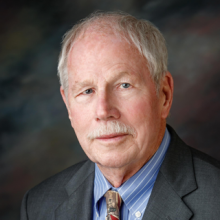 Abstract:  The Blended Wing Body (BWB) is an advanced configuration concept for a subsonic transport that has been under development at Boeing for the past several years. Compared to a conventional tube and wing configuration, a BWB offers a 20% reduction in fuel burn and airport noise 50 dB below Stage III. However, the BWB brings two primary technical challenges: robust flight mechanics of a tailless configuration, and creation of a light-weight structure for a flat-sided pressure vessel. A description of the successful resolution of both challenges is presented.

Bio:  Robert H. Liebeck's contributions to wing design and the design of airplanes from high-altitude aircraft to subsonic transports impact many forms of air transportation today. In his 58 years at Boeing, he has served as program manager on several advanced-concept airplane programs. He has an extensive list of technical publications, and his airfoil work is discussed in several textbooks on aerodynamics. He attained world recognition starting in the 1970s with his novel designs for high-lift “Liebeck airfoils.” As a world-renowned authority in the fields of aerodynamics and aircrafts design, Liebeck is a cocreator of the Blended-Wing-Body (BWB) subsonic transport airplane. In turn, he manages the BWB Program at Boeing, leading to the development of a 500-passenger flying-wing subsonic transport aircraft that offers the potential for a 30% reduction in fuel burn when compared to today's conventional tube and wing airplane configurations. The BWB X-48B, a subscale prototype with a 21-foot wingspan, is undergoing development by Boeing in collaboration with NASA. Liebeck also holds the positions of adjunct professor at UC Irvine, where he teaches courses in aerodynamics, flight mechanics and airplane design; and Professor of the Practice of Aeronautics at Massachusetts Institute of Technology. As a consultant, he has designed wings for racing cars that won in Indianapolis 500 and Formula One races, and his wing was recently selected for the NASCAR "Car of Tomorrow." He also designed the keel section for the yacht that won the America's Cup in 1991, and the wing for a World Championship aerobatic airplane. Liebeck received the Daniel Guggenheim Medal in 2010, one of the most prestigious awards in aviation. He is a member of the National Academy of Engineering, a Boeing Senior Technical Fellow, AIAA Honorary Fellow, and a fellow of the Royal Aeronautical Society. He is a recipient of the AIAA Aerodynamics Award, AIAA Aircraft Design Award, AIAA Wright Brothers Lectureship in Aeronautics, AIAA Dryden Lectureship, ASME Spirit of St. Louis Medal, and ICAS Award for Innovation in Aeronautics. In November 2019, Liebeck will be inducted into the International Air & Space Hall of Fame of the San Diego Air & Space Museum.