CBE Seminar: Bacterial Mechanosensing - The Force Will be With You, Always 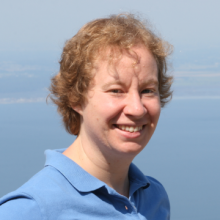 Abstract:  The attachment of bacteria to a surface is often a key initial step in the development of biofilms, communities of bacteria that are significant contributors to disease, fouling and damage to the built environment. Recently, work from several groups including our own has indicated that bacteria can sense and respond to mechanical cues from their environment. Understanding how bacteria sense surface attachment and, in response, begin the process of biofilm initiation, has the potential to give rise to new avenues to biofilm prevention; such understanding would also be a major advance in basic science, since very little is known about bacterial mechanosensing. Our earlier work showed that bacteria can sense mechanical shear stress as a cue for surface attachment (Rodesney et al, 2017 Proceedings of the National Academy of Sciences).  More recently, we have examined the relationship between substrate stiffness, mechanical deformation of the bacterial cell, accumulation of bacteria on the surface and dynamics of the cyclic-di-GMP intracellular signal that is widely used as a second messenger to control biofilm development. Our model organism for these studies is Pseudomonas aeruginosa, a widely-used model organism for biofilm development and a common hospital-acquired pathogen. We find that when the chemistry of a gel substrate (alginate, agarose or cross-linked poly-ethylene glycol) is held constant but the effective elasticity is varied, bacteria accumulate more on, and activate cyclic-di-GMP signaling earlier on, a stiffer substrate. We further show that the response to the substrate mechanics at times greater than one hour after attachment depends on different cellular structures than does the response to substrate mechanics at times less than one hour after attachment. This shows that bacterial mechanosensing leading to biofilm development is likely a multistep process involving more than one sensory element.

Bio: Vernita Gordon grew up in Georgia, did her undergraduate work at Vanderbilt University (where she double-majored in physics and math), and did her graduate work in physics at Harvard University. After getting her Ph.D. in 2003, she did postdocs at University of Edinburgh and University of Illinois at Urbana-Champaign, and joined University of Texas-Austin in 2010 as part of their physics faculty. Her research group includes physicists, biologists and engineers who are studying the interplay between physics and biology in biofilm formation, with a long-term view to developing new approaches to preventing and remediating harmful biofilms. She enjoys hiking with and reading to her kids, singing and knitting.