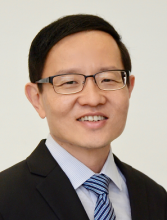 Abstract: There are approximately 5 billion cells in one milliliter of blood with red blood cells (RBCs) accounting for  more than 99 percent of all cellular components. Besides blood constituents, pathogenic microorganisms or diseased cells can also be present in peripheral blood. In fact, this is of clinical significance as their presence in blood can present possible routes for disease detection, diagnosis and even therapy. However, the presence of a large number of RBCs complicates removal of pathogens in blood as well as makes disease diagnosis, such as detection of rare circulating tumor cells (CTCs) in blood of cancer patients, extremely challenging. Here, we address these issues and demonstrate that physical biomarkers such as cell size and deformability can be effectively used for diseased cell detection (for diagnosis) as well as separation (for therapy) from blood using microfluidics by leveraging its many inherent advantages, such as high sensitivity and spatial resolution, short processing time and low device cost. We developed a suite of microfluidic biochips that exploit the principles of size/deformability-based separation as well as inertial focusing to allow for high throughput continual detection and separation of diseased cells such as bacteria, malaria-infected red blood cells and CTCs. We will showcase examples of cancer diagnosis via the detection and retrieval of CTCs from peripheral blood of patients through a routine blood draw (aka liquid biopsy), detection of malaria-infected red blood cells as well as therapy by demonstrating the extracorporeal removal of bacteria from blood. These simple, efficient and cost effective microfluidic platforms will be imperative in realizing point-of-care (POC) diagnostics as well as the enrichment of clinical samples for subsequent downstream molecular analyses. Some of these devices have since been commercialized.

Bio: Chwee Teck (C.T.) Lim is the inaugural NUS Society Professor, founding principal investigator of the Mechanobiology Institute as well as acting director of the Biomedical Institute for Global Health Research & Technology at the National University of Singapore. His research interests include mechanobiology of human diseases and microfluidic technologies for diagnosis and precision medicine. Lim has authored more than 360 journal papers including in Nature, Nature Materials, Nature Communications, Nature Protocols and PNAS. He is an elected fellow of both the American Institute for Medical & Biological Engineering and the International Academy for Medical & Biological Engineering as well as an elected member of the World Council of Biomechanics. He currently sits on the editorial boards or as associate editor of more than 20 international journals. He has co-funded five startups and one incubator. Lim and his team have garnered more than 80 research awards and honors including the HFSP Award 2018, International Precision Medicine Conference Prize 2017, Asian Scientist 100 in 2016, ASEAN Outstanding Engineering Achievement Award 2016, Wall Street Journal Asian Innovation Award (Gold) 2012, President's Technology Award 2011 and the IES Prestigious Engineering Achievement Award 2010, 2016, among others.