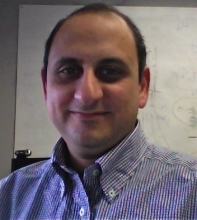 Abstract: The future of social networking is in the mobile world. Future network services are expected to center around human activity and behavior. Wireless networks (including ad hoc, sensor networks and DTNs) are expected to grow significantly and accommodate higher levels of mobility and interaction. In such a highly dynamic environment, networks need to adapt efficiently (performance-wise) and gracefully (correctness and functionality-wise) to growth and dynamics in many dimensions, including behavioral and mobility patterns, on-line activity and load. Understanding and realistically modeling this multidimensional space is essential to the design and evaluation of efficient protocols and services of the future Internet.

This level of understanding to drive the modeling and protocol design shall be developed using a data-driven paradigm. The design philosophy for the proposed paradigm is unique in that it begins by intensive analysis of measurements from the target contexts, which then drive the modeling, protocol and service design through a systematic framework, called TRACE. Components of TRACE include: (1) tracing and monitoring of behavior, (2) representing and analyzing the data, (3) characterizing behavioral profiles using data mining and clustering techniques, and finally, (4) employing the understanding and insight attained into developing realistic models of mobile user behavior, and designing efficient protocols and services for future mobile societies.

Tracing at a large scale represents the next frontier for sensor networks (sensing the human society). Our latest progress in that field (MobiLib) shall be presented, along with data mining and machine learning tools to meaningfully analyze the data. Several challenges will be presented and novel use of clustering algorithms will be provided. Major contributions to modeling of human mobility; the time variant community model, TVC and Community Mobility (COBRA) will also be discussed. In addition, a novel framework for measuring vehicular mobility at planet scale, using thousands of webcams around the world, shall be presented.

Insights developed through analysis, mining and modeling will be utilized to introduce and design a novel communication paradigm, called profile-cast, to support new classes of service for interest-aware routing and dissemination of information, queries and resource discovery, trust and participatory sensing (crowd sourcing) in future mobile networks. Unlike conventional - unicast, multicast or directory based - paradigms, the proposed paradigm infers user interest using implicit behavioral profiling via self-monitoring and mining techniques. In order to capture interest, a spatio-temporal representation is introduced to capture users behavioral-space. Users can identify similarity of interest based on their position in such space.

The proposed profile-cast paradigm will act as an enabler to new classes of service, ranging from mobile social networking and navigation of mobile societies and spaces, to computational health care, mobile health, emergency management and education, among others. The ideas of similarity-based support groups will be specifically highlighted for potential applications in disease-self management, collaborative education and emergency response.

Bio:  Ahmed Helmy is a professor and graduate director in the Computer and Information Science and Engineering Department at the University of Florida. He also was a visiting professor and August-Wilhelm Scheer Honorary Fellow of the Institute for Advanced Study at the Techincal University of Munich, Germany, in summer 2017. He received his doctorate in computer science in 1999 and master's degree in electrical engineering in 1995 from the University of Southern California, a master's in engineering mathematics in 1994 and bachelor's in electronics and communications engineering in 1992 from Cairo University, Egypt. He was a key researcher in the Network Simulator NS-2 and Protocol-Independent Multicast (PIM) projects at USC/ISI from 1995 to 1999. Before joining UF in 2006, he was on the Electrical Engineering-Systems Department faculty at USC starting Fall 1999, where he founded and directed the Wireless and Sensor Networks Labs.

In 2002, he received the NSF CAREER Award for his research on resource discovery and mobility modeling in large-scale wireless networks. In 2000 he received the Zumberge Award, and in 2002 he received the best paper award from the IEEE/IFIP MMNS Conference. In 2003 he was the electrical engineering nominee for the USC Engineering Jr. Faculty Research Award and a nominee for the Sloan Fellowship. In 2004 and 2005, he received the best faculty merit ranking in the electrical engineering department at USC. He was a winner in the ACM MobiCom 2007, a finalist in 2008 SRC competitions, a 2nd place winner in ACM MobiCom WiNTECH demo competition 2010, and a finalist/runner-up in the 2012 ACM MobiCom SRC competition. In 2013, he won the best paper award from ACM SIGSPATIAL IWCTS. In 2014 he won the Epilepsy Foundation award for innovation and the ACM MobiCom Mobile App Competition (1st place) and startup pitch competition (2nd place). In 2015 he won the Internet Technical Committee best paper award from the IEEE ComSoc conferences/symposia of 2013. In 2017 he (with his group) won the best poster award at the IEEE INFOCOM conference. He is leading (or has led) several NSF funded projects including MARS, STRESS, ACQUIRE, AWARE and MobiBench.