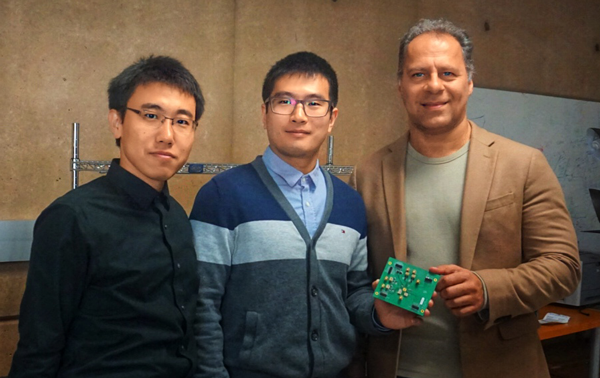 April 4, 2019 - For most cellphone users, sending and receiving data may be even more important than having a conversation with someone on the other end. The speed and quality of those downloads and uploads – whether videos, movies or television shows – also is significant. Communication front-end chips are fixed to receive a specific band of the radio spectrum, but excess traffic on that band can reduce bandwidth availability, slowing down transmission and negatively affecting the quality that everyone wants.

With the release of each new telecommunications standard – 3G, 4G LTE, etc. – the radio spectrum becomes more and more crowded. Manufacturers are trying to improve on capacity and speed by finding ways to access more bandwidth. In many cases, this means adding additional chips to cellular receivers, with each having the capability to access different parts of the spectrum. This approach can make phones bulky and expensive.

Software-defined radios skirt the issue by detecting and reprogramming the radio to transmit and receive on unused or low-traffic bands. But there is a downside: in order to pick and choose available frequencies, these systems require sophisticated adaptive filters to remove unwanted interference from other frequency bands. The most advanced of these filters, called N-Path, also creates unwanted signals, known as spurious re-radiation or spurious emission. These spurious emissions are typically so strong that they reduce the quality of communication, affect nearby users and violate communication standards.

Now, a team of Samueli School researchers led by Payam Heydari, professor of electrical engineering and computer science, has designed a new receiver architecture that seems to solve all of these problems. It eliminates the need for multiple chips and fixed-frequency filters, while also significantly suppressing spurious emissions so that they are compatible with the most stringent standard.

“Eliminating this spurious emission is really at the core of this invention,” Heydari said. “We designed the circuits so that the chip provides all the benefits of this N-Path filtering but mitigates the spurious re-radiation. It’s a reimagining of the receiver design with totally new topology.”

Heydari and his doctoral students Huan Wang and Zisong Wang presented their concept at the IEEE International Solid-State Circuits Conference in San Francisco last February to enthusiastic response. Their presentation was ranked number 1 in the conference’s wireless section.

“Bandwidths are currently very congested,” said Huan. “When you look into the receiver chip currently used in most cellphones, you’ll find multiple receivers, each for different part of the spectrum, and the entire system becomes complicated and costly. The main advantage of our chip is that we only use one receiver and it can handle all of the bands.”

The team, which works in UCI’s Nanoscale Communication Integrated Circuits Lab, says its chip provides the necessary filtering for zooming in on available radio bands, and “it can be tuned easily and on the fly, and integrated into the chip,” Huan added.

According to Heydari, the team’s design is the first to address the longtime problem of spurious emission. And, the 2.5-millimeter-square chip will eliminate the need for buffering content. “You are basically putting together a lot of bands, and therefore you are increasing the speed,” he said. “The speed means you don’t have to undergo lots of buffering; you will receive the data instantly.”

Heydari and his students have filed a patent application for their technology and are thinking about launching a startup company. In the meantime, Heydari is using the new chip design in his graduate course on radiofrequency circuit design. “This approach is so fundamental,” he said. “What we have designed is a receiver that can be used in cellphones, software defined radios and other devices, which could bring highly selective and programmable receivers to the market at an affordable price.”