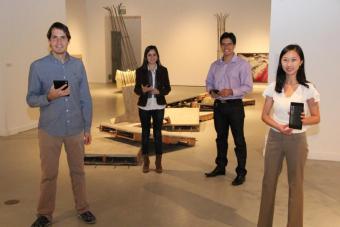 “In the museum world, we are always looking for ways to deepen visitor’s engagement with art,” explains Kate Hoffman, executive director of the Huntington Beach Art Center (HBAC). So when a group of graduate students from the engineering and computer science departments approached her with an idea for using technology to enhance visitors’ experience, she loved it.

The students tested their idea – a mobile application called Kaleri – at the HBAC in early December. Kaleri (which stems from the Greek word for gallery) does two things. First it provides a technologically savvy way for users to delve into a piece of artwork. Using innovative indoor positioning technology, the application recognizes the art that is closest to the visitor and displays it on a mobile device. Visitors can interact with a given piece of art by rating, bookmarking, using social networks to share with their friends, and storing this interaction for future retrieval. The second objective of Kaleri is to understand visitors’ behaviors – common routes, most viewed items, time spent at each artwork, comments posted, and returning visitor information – to help museums provide more engaging experiences. During the pilot test, 40 people used Kaleri to explore HBAC’s sculpture-based exhibit of contemporary art: Reverberation. 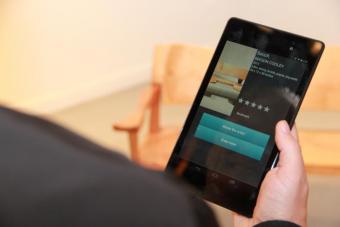 “This was an opportunity for our visitors to instantly learn more about a piece,” says Hoffman. “We are a city owned and operated institution with a limited budget. We aren’t able to offer audio tours. This was a way to access information through a type of technology that many people are familiar with and that generates excitement.”

The students have formed a company called B.A.T., or Beacon-Assisted Technologies. The museum app was not their first idea. Robert Regue, a doctoral student in transportation engineering had been using similar technology to monitor the travel patterns of vehicles. He began brainstorming business ideas with some fellow engineering doctoral students. Each contributed a different area of expertise. Anna Papio specialized in sensor networks for precise object tracking and localization. Joan Aguilar and Jaime Duarte, both mechanical engineering doctoral students had expertise in robotics and, prospectively, optimal control and prototyping.

“We came up with B.A.T., and the idea of monitoring people’s travel patterns, but it wasn’t until we entered a couple of business plan competitions and received feedback from judges that we refined our idea to become Kaleri,” says Regue.

The students entered the New York City Next Idea Competition and made the semifinals (one of 22 teams out of more than 220 international applicants). They entered the Paul Merage Business Plan Competition but didn’t make it past the first phase. “We realized we needed to bring in people with different perspectives, so we recruited Yue Yu and Estel Carbo,” says Regue. Yu is a doctoral student in information and computer science, and Carbo is a UCI Extension certificate program graduate in marketing communications and public relations. 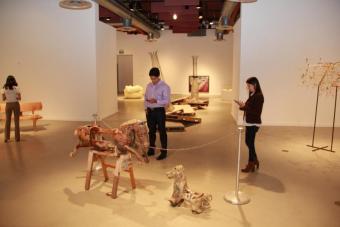 The team then entered and won the grand prize ($5,000) in the 10th annual Butterworth Competition in the School of Information and Computer Sciences. The competition, named for Bren School alumnus Paul Butterworth, chief technical officer of AccessG2 Inc., is designed to promote the creation of commercially viable technology and products while fostering entrepreneurship among students. As part of the competition, the B.A.T. team had been assigned two industry mentors, Arie Shen and Jim Doane, who helped them narrow down their focus on the museum market, and then helped them connect with their first potential customer, HBAC.

“The feedback we received during the pilot tests at HBAC serves as further validation of our idea,” says Papio.  “We received critical feedback about the features that visitors valued most. We will now work on further developing the technology to implement it in other local museums.”