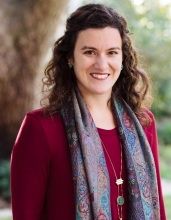 Abstract: Many forms of cardiac disease, including myocardial infarction (MI) and hypertrophic cardiomyopathy (HCM), are characterized by changes in contractile function and tissue stiffness. Myofibroblast activation contributes to fibrotic tissue remodeling in many cardiac conditions, especially after MI, and is affected by changes in tissue mechanics and interactions with other cardiac cells. In my Ph.D. studies, I found that therapeutic targeting of a cadherin expressed in myofibroblasts and inflammatory cells after MI limits harmful remodeling. In my postdoc, I have studied how HCM mutations with surprising and variable effects on myosin function lead to hypercontractility, cytoskeletal disruption, and hypertrophy on the cellular scale and in patients. Using hiPSC-CMs, engineered cell platforms and computational models, I have linked measured changes in molecular and cellular biomechanics, probed sources of cellular variability and identified mechanisms of hypercontractility. My research leverages engineering tools to clarify the mechanical and biological mechanisms of cardiac disease and potential therapies.