MSE Seminar: At the Crossroads of Additive Manufacturing, Analytics and Advanced Materials 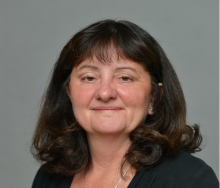 Abstract: Additive manufacturing promises new pathways for integration of advanced alloys with complex structural component design. Achieving desired properties mandates control of structure and an improved understanding of the processes that occur at the individual melt pool scale and their superposition as melting occurs on a layer-by-layer basis. A new technique developed at UCSB, TriBeam tomography, has been employed to acquire chemical, structural and misorientation information on structural alloys printed by electron beam and laser powder based processes. The data challenges with additive manufacturing and the corresponding 3D quantification of structure will be addressed. In large 3D datasets, the persistence of grains layer-to-layer due to remelting / nucleation has been studied as a function of scan strategy. The benefits of multimodal data for characterization of submicron features will be discussed. Finally, 3D electron backscatter diffraction data indicates that the accumulation of large crystallographic misorientations during printing is directly related to the alloy solidification path. Implications for alloy design and new alloys for printed structures are discussed.

Bio: Tresa Pollack is the Alcoa Distinguished Professor of Materials at UC Santa Barbara. Pollock’s research focuses on the mechanical and environmental performance of materials in extreme environments, unique high-temperature materials processing paths, ultrafast laser-material interactions, alloy design and 3D materials characterization. Pollock graduated with a bachelor's degree from Purdue University in 1984, and a doctorate from MIT in 1989. She was employed from 1989 to 1991 at General Electric Aircraft Engines, where she conducted research and development on high temperature alloys for aircraft turbine engines and co-developed the single crystal alloy René N6 (now in service). Pollock was a professor in the Department of Materials Science and Engineering at Carnegie Mellon University from 1991 to 1999 and the University of Michigan from 2000 - 2010. Her recent research has focused on development of new femtosecond laser-aided  3D tomography techniques, additive manufacturing, damage detection and modeling by resonant ultrasound spectroscopy, thermal barrier coatings systems, new intermetallic-containing cobalt-base materials, nickel base alloys for turbine engines, titanium alloys, lightweight magnesium alloys, Heusler-based thermoelectrics and bulk nanolaminates. Pollock was elected to the U.S. National Academy of Engineering in 2005, the German Academy of Sciences Leopoldina in 2015, and is a Department of Defense Vannevar Bush Fellow and a fellow of TMS and ASM International. She serves as editor in chief of the Metallurgical and Materials Transactions family of journals and was the 2005-2006 president of The Minerals, Metals and Materials Society.