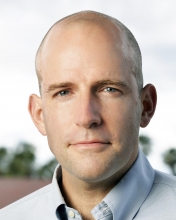 Abstract: Exoskeletons and active prosthetic limbs could improve mobility for tens of millions of people, but two serious challenges must first be overcome: we need ways of identifying what a device should do to benefit an individual user, and we need cheap, efficient hardware that can do it. In this talk, we will describe an approach to the design of wearable robots based on versatile emulator systems and algorithms that automatically customize assistance, which we call human-in-the-loop optimization. We will discuss recent successes of the approach, including large improvements to the energy economy, and speed of walking and running through optimized exoskeleton assistance. We will also discuss the design of exoskeletons that use no energy themselves yet reduce the energy cost of human walking, and ultra-efficient electroadhesive actuators that could make wearable robots substantially cheaper and more efficient.

Bio: Steve Collins is an associate professor of mechanical engineering at Stanford University, where he teaches courses on design and robotics, and directs the Stanford Biomechatronics Laboratory. He and his team develop wearable robotic devices to improve the efficiency, speed and balance of walking and running, especially for people with disabilities such as amputation or stroke. Their primary focus is to speed and systematize the design process itself by developing and using versatile prosthesis and exoskeleton emulator hardware and algorithms for human-in-the-loop optimization. They also develop efficient autonomous devices, such as energy-efficient walking robots, ultra-low-power electroadhesive clutches and unpowered exoskeletons that reduce the energy cost of walking.

Collins received his B.S. in mechanical engineering in 2002 from Cornell University, where he performed research on passive dynamic walking robots with Andy Ruina. He received his Ph.D. in mechanical engineering in 2008 from the University of Michigan, where he performed research on the dynamics and control of human walking with Art Kuo. He performed postdoctoral research on humanoid robots with Martijn Wisse at T. U. Delft in the Netherlands. He was a professor of mechanical engineering and robotics at Carnegie Mellon University for seven years. In 2017, he joined the mechanical engineering faculty at Stanford. Collins is a member of the Editorial Board of Science Robotics and the Scientific Board of Dynamic Walking. He has received the Young Scientist Award from the American Society of Biomechanics, the Best Medical Devices Paper from the International Conference on Robotics and Automation, and the student-voted Professor of the Year designation in his department. More information at: biomechatronics.stanford.edu.