EECS Seminar: Topics from the Past, Present and Future of Polar Coding 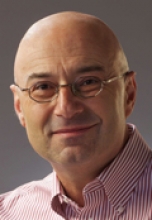 Abstract: Polar coding, invented by Arikan 10 years ago, is one of the most original and profound developments in coding theory to date. We will not attempt to summarize 10 years of polar coding in one talk. Instead, we hope this talk will provide a glimpse into several topics curated from the past, present and future of polar codes. No prior knowledge of polar coding is assumed; we will begin with a tutorial on polarization theory and polar codes. We will then describe CRC-aided list-decoding of polar codes, starting with our original motivation/intuition for this algorithm and concluding with comments on its use in the 5G standard. We will also present our recent results on polar codes with large kernels. In particular, we will show that such codes not only approach channel capacity, but do so as fast as theoretically possible, at least on the binary erasure channel.

Bio:  Alexander Vardy is the Jack Keil Wolf Chair Professor at UC San Diego, where he is affiliated with the Departments of Electrical and Computer Engineering, and Computer Science and Engineering and the Qualcomm Institute. He was born in Moscow, U.S.S.R, and grew up in Israel. He graduated summa cum laude from the Technion – Israel Institute of Technology in 1985, and completed his doctorate in 1991 at the Tel Aviv University. Since 1987, he has been working in the field of coding theory. As part of his work, he has discovered certain codes and decoding algorithms that are now named after him. His 2003 paper with Ralf Koetter on algebraic soft-decision decoding of Reed-Solomon codes won the IEEE Information Theory Society Paper Award, and the resulting decoding algorithm became known as the Koetter-Vardy decoder. In his 2005 paper with Farzad Parvaresh (FOCS Best Paper Award), he discovered the Parvaresh-Vardy codes. In his 2011 paper with Ido Tal (Communications & Information Theory Societies Joint Paper Award), he introduced CRC-aided list-decoding of polar codes that is currently used in 5G wireless communications. He also holds the record for the densest packing of spheres in 20 dimensions and is a co-discoverer of the only known q-analogue of a Steiner system.