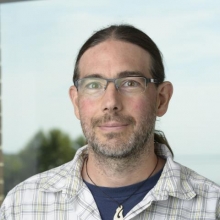 Abstract: Dissolved organic matter (DOM) is the most dynamic and least understood component of the global carbon cycle and it also plays a key role in environmental engineering. For example, it supplies the precursors of disinfection by-product formation and removal of DOM is part of the majority of drinking water treatment plants. Effluent DOM (EfDOM) is more defined by bacterial metabolites, breakdown products from xenobiotics and a diverse suite of pharmaceuticals and daily care products. However, the molecular composition of DOM present in all aquatic systems remains largely hidden due its extreme complexity. Recent analytical advancements in mass spectrometry opened up an opportunity to drastically enlarge the analytical window of DOM characterization. This seminar will focus on natural DOM characterization and the observed chemodiversity of DOM in natural and engineered systems.

Bio: Michael Gonsior is an associate professor at the University of Maryland Center for Environmental Science. He is a trained analytical/environmental chemist and his research is largely centered on aquatic biogeochemistry. His lab’s interest is in characterizing complex dissolved organic matter in natural and engineered systems using modern analytical approaches such as ultrahigh resolution mass spectrometry and optical properties characterization of chromophoric DOM (CDOM). He also has developed a unique photo-degradation system and subsequently was awarded the Honorable Mention to the Masao Horiba Award in Kyoto in 2017. Furthermore, he has applied modern analytical tools to evaluate disinfection by-products (DBPs) and discovered several hundred new DBPs in recent years. Gonsior has published over 40 peer reviewed publications in highly ranked journals and was a featured scientist in the award-winning documentary "A Plastic Ocean."