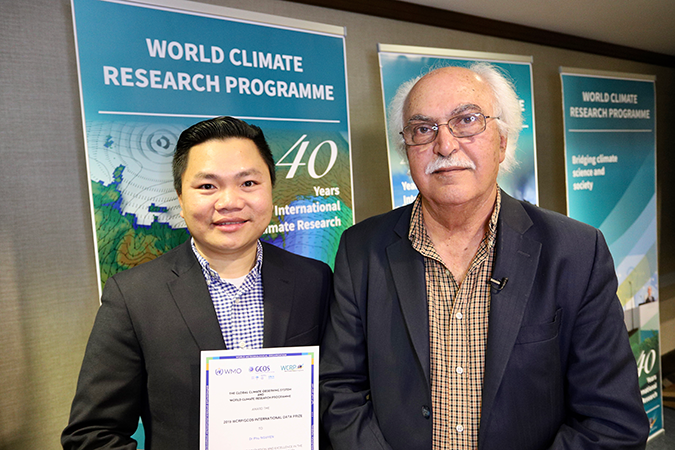 Jan. 8, 2020  - The Samueli School’s Phu Nguyen won an international award last month from the World Meteorological Organization. The 2019 WCRP/GCOS (World Climate Research Programme/Global Climate Observing System) Data Prize was awarded to Nguyen Dec. 8, in San Francisco, in recognition of his innovation and excellence in the preparation and provision of climate data. The prize is awarded annually to an early- to mid-career researcher for his or her outstanding contribution to the Earth system science community.

Nguyen, assistant adjunct professor of civil and environmental engineering, is affiliated with UC Irvine’s Center for Hydrometeorology and Remote Sensing (CHRS). He shared the award with Hamed Ashouri, a former UCI doctoral student at the center, who now works as a data scientist at Facebook, Inc.

Nguyen was nominated for the WMO award by CHRS director and Distinguished Professor Soroosh Sorooshian, who lauded Nguyen’s “remarkable scholarship and talent in the development of user-friendly climate databases,” as well as the proven positive impact his flash flood forecasting research has had on related research. Antonio Busalacchi, president of University Corporation for Atmospheric Research, co-nominated Nguyen.

Nguyen and his team at CHRS developed multiple user-friendly web portals to provide the public with access to the databases of CHRS’s rainfall datasets, named PERSIANN. His team developed RainSphere, an interactive system for exploring the trends in historic global precipitation patterns, and created the iRain website, as well as an iRain app, to deliver real-time global rainfall measurements. The CHRS’s PERSIANN websites have been accessed by users from over 200 countries, and distributed more than 19 terabytes of rainfall data in 2018.

In addition to web system development, Nguyen has provided training courses on the CHRS PERSIANN datasets for operational hydrologists and water resource engineers in multiple countries in Asia and Africa. His workshops have been supported by the U.S. Army Corps of Engineers’ International Center for Integrated Water Resource Management.

“I was very surprised and happy when my name was called for the joint award with Dr. Hamed Ashouri for our contributions to the CHRS PERSIANN systems of climate data for their widespread impact on climate science,” Nguyen said. “I am proud of being a member of CHRS under the leadership of Professor Sorooshian and a faculty member of the CEE department at UCI. I would like to acknowledge my colleagues at CHRS for this great honor.”