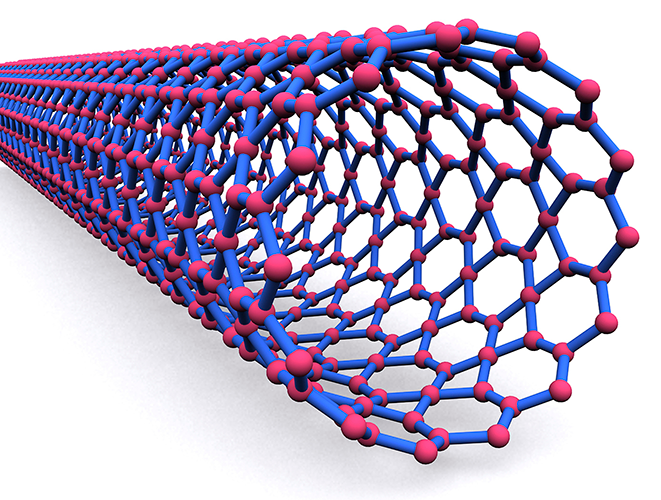 Aug. 28, 2019 - In a follow-up to a study published last year in ACS Nano, electrical engineering and computer science professor Peter Burke and his former doctoral student Jinfeng Li added important detail to the question of how nanowires hold an electrical charge.

The new paper, published in Nature Communications, studied capacitance (the ability to hold a charge) at the level of a single nanotube. Their previous work measured capacitance in a .1 millimeter-square nanowire mat consisting of millions of the tiny one-dimensional wires called nanotubes. The combined work lends critical information to the quest to improve electronic performance in supercapactitors – tiny batteries that power biomedical devices, sensors and other miniature electronics – and other biosensing applications.

Storage of an electrical charge occurs at the interface between the nanotube and an electrolyte solution. But the signal of a single nanotube is almost immeasurably small, especially when it is in contact with a conducting solution, which creates background noise that can drown it out.

To overcome this obstacle, the researchers designed a device with an integrated on-chip shield, which shunts away unwanted noise, leaving only the signal they want to measure. This allowed them to study the capacitance between the nanotube and an electrolyte in fluctuating conditions, including varying voltage levels and ionic concentrations. The information improved their understanding of the overall system and allowed them to make predictive suggestions as to how to improve device performance.

“The electronic interface between a nanotube and ions in a liquid electrolyte is governed by two distinct physical phenomena: quantum and chemical,” Li explained. By varying the conditions and isolating the resulting signal, the researchers were able to determine the relative contributions of the quantum and electrochemical capacitance and confirm the measurements with theoretical models.

“This technique, proven in concept for the case of carbon nanotubes, is applicable to a broad class of reduced-dimensional devices, including nanowires, nanoribbons, and quantum dots, of any material,” Burke said. “Thus, this represents an important measurement of the quantum effects on capacitance in reduced dimensional systems in contact with liquid electrolytes, an important and emerging theme in the interface between nanotechnology, energy and life.”